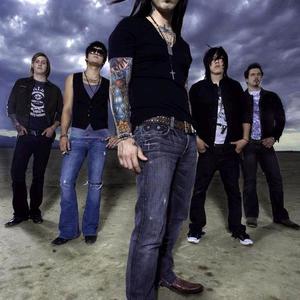 Here is some background information on Burn Halo from Songfacts.com Burn Halo is a hard rock band originating from Orange County, California and Tulsa, Oklahoma. They comprise lead vocalist James Hart, lead guitarist Joey Cuhna, rhythm guitarist Brandon Lynn, bassist Aaron Boehler and drummer Dillon Ray. Their self-titled debut album was released on March 31, 2009 through Rawkhead Rekords. Burn Halo's second album, Up From The Ashes, was the group's first effort written and recorded as a band, as their self-titled debut set was all written by frontman James Hart himself with outside writers...

Burn Halo is a hard rock band originating from Orange County, California and Tulsa, Oklahoma. They comprise lead vocalist James Hart, lead guitarist Joey Cuhna, rhythm guitarist Brandon Lynn, bassist Aaron Boehler and drummer Dillon Ray. Their self-titled debut album was released on March 31, 2009 through Rawkhead Rekords.
Burn Halo's second album, Up From The Ashes, was the group's first effort written and recorded as a band, as their self-titled debut set was all written by frontman James Hart himself with outside writers, and recorded by the singer with session musicians. It was released on June 28, 2011, through Rawkhead Records.

When one door closes, another one opens. This couldn't be truer for musician James Hart, who spent nearly a decade recording and touring as the frontman of Orange County band 18 Visions. After their breakup in early 2007, Hart quickly redirected his creative energy and honed his talent into a singular vision that fully represents his individual skill and ideas. Never losing momentum, Hart landed a label deal with Island/Def Jam and began working almost immediately with songwriter Zac Maloy on what would become Burn Halo's charismatic self-titled debut.

Between May and October of 2007, Hart made weeklong treks to Tusla, OK to write and demo with Maloy, solidifying his objective of what the music would sound like and focusing on writing songs that would construct a well-balanced record. ?I knew that I wanted a clear-cut rock ?n' roll band, which is something I had not had in the past,? Hart says of the music. ?My vision and my brand of rock ?n' roll without having to compromise on any of the songs or any of the material. I wanted to make a very straightforward rock album. Something that had commercial appeal, but also something that had a classic, vintage mid-?80s throwback vibe to it.?

Hart recorded the album from October to November of 2007 with Maloy as producer, laying down the tracks with an army of skilled studio musicians, including Nickelback drummer Daniel Adair, former Jane's Addiction bassist Chris Chaney, and guitarist Neil Tiemann who now tours with American Idol winner David Cook. In the studio Maloy was particularly helpful in getting the best possible performance out of Hart, especially when it came time to lay down the vocals. ?I really felt like he was able to grasp what I wanted to do and where I wanted to take this,? Hart says. ?From a producer standpoint I feel like he really knocked it out of the park. As a vocalist he was able to bring a lot out of me instead of having me go through the motions and just get the part right. Emoting a little more than I have in the past. He was really able to pull a lot of character out of my voice.?

The result is a dynamic, gripping collection of gritty rock songs that immediately engage their listener, ranging from the propulsive ?Save Me,? which Hart describes as the ?heaviest? track on the record, to the memorable first single ?Dirty Little Girl,? which features Avenged Sevenfold guitarist Synyster Gates. Hart also reveals his emotional and musical range on ?Here With Me,? an emotive throwback ballad that resounds with immediacy and sincerity, and showcases Hart's songwriting goals for the album. ?I wanted to touch more on real life situations and real life stories,? Hart says. ?I wanted to paint a real life picture. I started listening to country and a lot of those songs are very real and down to earth. They are songs about real life, about situations you would come across with a lover or the loss of a friend or heading down a dark path in life. I wanted it to be really simple and easy to digest. I wanted there to be no question about what I was singing about.?

After the album was completed, in early 2008, Island elected not to release Burn Halo's debut, leaving Hart with the tough job of finding a new home for his project. Nothing felt quite right, though, so Burn Halo's manager Bret Bair formed his own label Rawkhead Rekords through Warner Music Group to release the record. Hart spent much of 2008 finalizing the lineup of his touring band- which he hopes will help write and record Burn Halo's successive albums- with Aaron Boheler on bass, Joey Cunha on lead guitar, Allen Wheeler on rhythm guitar, and Ryan Folden on drums. All that's left is to show it all to the world. ?I think this is a real statement album for me,? Hart says. ?Anyone who is familiar with me and my past is going to be able to get this record. They're going to understand why I made this record and that this is the record I've been wanting to make.?

Up From The Ashes