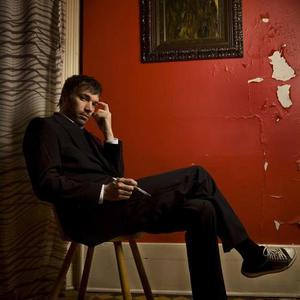 Richard Terfry, better known as Buck 65, is a Canadian hip hop artist, MC and turntablist. However he has recently moved away from hip hop in a stylistic context, and is moving closer to blues, country, rock, folk and avant-garde genres. That said, his new direction is seemingly still underpinned by an extensive background in abstract hip hop, his trademark rhyme-phrasing and lyrical aspiration evident in the altered timbre vocal delivery displayed in his more recent releases.

Terfry is also a host at CBC Radio 3, with hosting a program on the CBC Radio 3 website's web radio station during weekdays. In addition, he will be the host of the weekday 3-6pm CBC Radio 2 show beginning in the fall of 2008.

Terfry was born in 1972 and raised in Mount Uniacke, a rural community outside of Halifax, Nova Scotia. He was first exposed to rap music in the mid-1980s while listening to CBC Radio's late night show Brave New Waves, and then by listening to Halifax campus community radio station CKDU. CKDU then broadcast at only 33 watts, and he had to climb a tree in his yard to hear the station's hip hop show on his cheap transistor radio. Fascinated by hip hop, the young Terfry taught himself how to rap, DJ, and, later, to produce records. His musical influences include MC Shan, David Lynch, Gitche Manitou, and Kool Keith.

Using the moniker DJ Critical, he later hosted a hip-hop show on CKDU called "The Bassment" (later renamed "The Treatment Program", when he assumed the stage name Jesus Murphy), which aired for several years. This period overlapped with many of his non-major-label releases.

Buck 65 has also used a number of other stage names including Johnny Rockwell, Stinkin' Rich, Haslam, and Uncle Climax. These pseudonyms typically represent different characters in his raps (as in Uncle Climax, Johnny Rockwell and Stinkin' Rich) or different aspects of Buck's creativity (as noted above, DJ Critical was his DJ name on CKDU.) Rumours abound that Buck 65's alias comes from his childhood nickname of Buck and his weight of 165 pounds; possibly the pseudonym comes from the weight of the first buck he shot or the $1.65 standard bus fare for Halifax Regional Municipality riders. He has been known to say on stage, "They call me Buck 65... I don't know why." Buck 65's website mentioned previously that he was named after his uncle's 1965 Buick automobile ("'65 Buick" is a track on the synesthesia album); he performed a show under that name but the promoter mistakenly wrote the name as it is now spelled.

Recently Buck 65 has recorded an EP under the name of Dirk Thornton alongside Irishman DJ Flip, it was scheduled for release early 2007 but the date was not set.

The first release under Dirk Thornton will be a 7" single with the tracks "Yesterday's News" and "Catwalk".

He is also involved in an online collaboration with "Greetings From Tuskan" auteur Jo?lle Phuong Minh L?, as Bike For Three, though a release is yet unforthcoming.

In 1993, he released his first cassette of rap tunes while performing under the alias Stinkin' Rich on the Halifax label No Records. The five song cassette was titled Chin Music, which was a reference to his past interest in baseball. The release brought Stinkin' Rich to the attention of members of Halifax alternative rock band Sloan. Sloan signed him to their independent record label Murderecords and released a 7" single and a full length cassette called Game Tight, again featuring a reference to baseball. (Terfry has often stated in interviews that in his teens he had been scouted to play for the New York Yankees but that the death of the talent scout coupled with an injury had caused the deal to fall through)

After a brief break, Terfry returned reconstituted as Buck 65, releasing Language Arts on cassette and the 12" single Wildlife Trilogy, followed by Vertex, which included his popular song "The Centaur." He recorded Sebutonedef (released in 1996 by Funtrip Records) as a collaboration with fellow Halifax artist Sixtoo. Other releases by the duo, known as the Sebutones, are Psoriasis and 50/50 Where It Counts. While still far from mainstream success, he received several odd jobs in Canada's entertainment industry, including making soundtrack music and providing narration for a TV commercial for NBA apparel, and song lyrics for the popular children's program Sesame Street. During a live performance Buck 65 told a story in which he attributed why he was chosen for Sesame Street to three things; his upstanding lifestyle of not drinking, smoking, or doing drugs, his intelligence that wasn't too intelligent for the kids, and Sesame Street's assumption that he was a virgin.

Man Overboard, originally released on the anticon. label, was a significant turning point in his career. The record, and the entire anticon. collective (of which Sixtoo was also a part), were considered hallmarks of a new avant-garde movement in underground hip hop. It was at this time that Buck met Cincinnati DJ Mr. Dibbs who inducted him into the 1200 Hobos, a loosely-knit hip-hop collective named for their proficiency in manipulating the Technics 1200 turntable.

Many of his early projects attracted attention after they were re-released, first on the independent Metaforensics label and subsequently by Warner Music Canada. While Buck 65 has gained critical acclaim and worldwide exposure through his major label deal, commercial success has escaped him. Although Warner's worldwide affiliates distribute his records, Warner USA does not. After a deal was signed with V2 USA, This Right Here Is Buck 65 was released in the States, a sort of "Best of" that was marketed as an introduction to his work. However after V2 chose not to release his next effort, Secret House Against the World, the deal was amicably dissolved. Since then Buck 65 was signed onto Strange Famous Records where he's planning on taking over hip-hop with Sage Francis. His latest release is titled "Situation".

Buck's most recent albums have gradually moved away from his original 'pure' hip-hop sound into territory influenced by folk, blues and electronica, with some even comparing elements of his sound to Tom Waits. Some of Buck 65's music is used on the Canadian show Trailer Park Boys, frequently in the character Julian's car. He gained additional recognition in 2006 when he appeared at the national Juno Awards with Pamela Anderson.

In August 2004, he sparked controversy in the underground hip-hop world over comments he made to an interviewer in Kerrang! magazine. Buck was quoted as saying:
?I now hate hip hop, the more I've educated myself about music, the more I've grown to hate it. I don't use that word lightly, either.?
In response, former anticon. label-mate Sage Francis (in a post on his website) stated that
"Buck has had his head up his arse for many years now."
Buck later wrote in a letter to Exclaim!:
?I'm apologizing for all that. I lost my cool on tape which is never good. The journalist was provoking me, calling me a sell-out and a whore. I was trying to make a point by playing devil's advocate, but I went way overboard. No hint of irony or role-playing or intelligence came across in the story. Now I just look like an idiot. I take it back. I don't really believe any of that. I don't think being able to read music is a concern. Most of my favourite music was made by non-educated musicians. It doesn't matter. I still have heavy criticisms of most hip hop, but I really didn't make them well on this particular day. I put my foot in my mouth and I'm apologizing for that."

Buck 65 released a 5 song digital EP called "Dirty Work". It was released over a month long campaign, adding one song per week for free download via his MySpace page. All five tracks are still available for download on his official website. The EP comes with artwork drawn by Buck himself, and the tracks are all b-sides from the full length record 'Situation'.

Buck 65 released the album Situation on October 30th, 2007, on Strange Famous Records in the US and Warner Music worldwide. The album is a concept album based around the year 1957, and is a return to a more 'pure' hip-hop sound than the previous blues, country and avant-garde influences in Secret House Against the World. It was produced by fellow Halifax DJ Skratch Bastid, aimed at making a "classic hip-hop record that pulses with joy and clarity of purpose".

Buck 65 is currently working on a new album which, judging from live material, will feature much more prominent electronic beats than before. Additionally, Buck 65's collaboration project with "Greetings From Tuskan" auteur Jo?lle Phuong Minh L?, Bike for Three!, has its debut album completed for release in early 2009.

He has been a host of CBC Radio 3's web radio for the past year, and recently accepted daily hosting duties on CBC Radio 2's national radio beginning fall 2008.

Secret House Against The World

This Right Here Is Buck 65