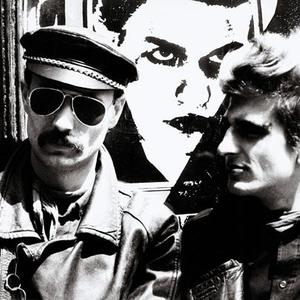 Borghesia is a Slovenian band that had its heyday in the eighties. Its members were/are Aldo I., Lado J., Borut K., Niklas S., Dario S. and Tom T. The band/group was formed 1983 in Ljubljana, the capital of Slovenia, by some students as a spin-off to a theatre project. They had their own place where they performed and arranged concerts. Among other things Borghesia organised Laibach's first public appearance.

Borghesia's image is antiauthoritarian and anti-nationalistic. However, they emphasise different forms of submission and coercion, not just political, but also sexual by nature. Borghesias visual image, for example on their record covers, is very explicitly homosexual and has sadomasochistic undertones.
Between 1987 and 1992 the group was signed by "Play it again Sam" alongside artists like Front 242 and similar EBM-groups.