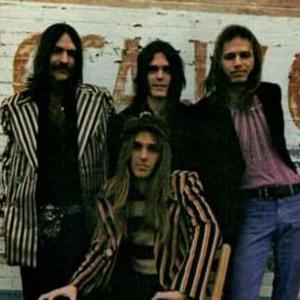 Blue Ash is a United States band, formed in Ohio in the summer of 1969 by bassist Frank Secich & vocalist Jim Kendzor. Guitarist Bill Yendrek and drummer David Evans were recruited later that summer. The band debuted at "The Freak Out", a club in Youngstown, OH on October 3, 1969. They gained a loyal following playing an endless stream of one-nighters over that year. In October 1970, Bill Yendrek, was replaced by guitarist/songwriter Bill "Cupid" Bartolin.

The band debuted at "The Freak Out", a club in Youngstown, OH on October 3, 1969. They gained a loyal following playing an endless stream of one-nighters over that year. In October 1970, Bill Yendrek, was replaced by guitarist/songwriter Bill "Cupid" Bartolin.

Blue Ash continued playing 250-300 dates a year throughout Pennsylvania, New York, Ohio and West Virginia, while the songwriting team Frank Secich and Bill Bartolin accumulated an enormous amount of original material. In June 1972, Blue Ash signed a production contract with Peppermint Productions of Youngstown and started recording and sending out demos. In late 1972, they were signed to Mercury Records. Their first album "No More, No Less" was released in May, 1973 and received rave reviews in the rock press. It is considered a power pop classic, and is regarded as highly collectible among fans of that genre (it was finally released on CD on the Collectors' Choice label in September 2008). Blue Ash toured and opened for such acts as the Stooges, Bob Seger, Aerosmith, Ted Nugent and more but for lack of sales they were dropped by Mercury Records in May, 1974.

Blue Ash continued to play live and record, adding drummer Jeff Rozniata who replaced David Evans in 1974. They were signed to a singles deal with Playboy Records in 1977. The first single, "Look At You Now" became a regional hit in Texas, Oklahoma, Louisiana and Mississippi, as well as in Ohio and Pennsylvania. Playboy then offered an album deal. The LP "Front Page News" was recorded in Los Angeles in August of 1977 and released in October of that year. It was selling well, but in early 1978 Playboy International pulled the plug on Playboy Records and Blue Ash was once again without a label. They called it quits in 1979.

A few audience-recorded live tapes of the band exist (including one of the original lineup from January 31, 1974 at the Packard Music Hall in Warren, OH) but are of generally poor recording quality. Other tapes recorded by a fan who followed Blue Ash to many of their gigs are rumored to exist, but have yet to surface on the collectors circuit.

In the summer of 2003 original members Frank Secich, David Evans, Bill Bartolin and Jim Kendzor got together privately in Ohio to play once again and decided to reform the band. On November 8 they played the International Pop Overthrow at the Khyber Club in Philadelphia.

In the late 1990s, renewed interest toward the band was given a boost as a large cache of unreleased Blue Ash recordings fell into circulation amongst collectors. In the summer of 2004 an official release of that material -- a two CD retrospective called "Around Again" -- was released on Not Lame Records. It contains 44 songs of unreleased material spanning their career.

For their "reunion" gigs from 2003-2009, Frank Secich moved from bass guitar to rhythm guitar, and former members Brian Wingrove (piano) and Jeff Rozniata (drums) completed the band along with Bobby Darke (bass).

On October 3, 2009, guitarist Bill "Cupid" Bartolin died from complications of cancer, thus bringing to a sad end the story of Blue Ash.

Frank Secich is now a member of Deadbeat Poets, who have released one critically acclaimed CD and are working on a second one.