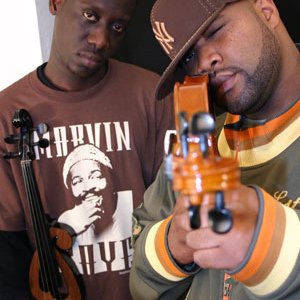 On May 21st 2005 Black Violin, two classically trained musicians took home the title '2005 Apollo Legends' which catapulted them to international fame. These two gentlemen, Kev Marcus and Wil B along with their DJ TK have created the ultimate synergy between classical and Hip-Hop music, and with it an incredible opportunity to reach young children. Since their triumph at the Apollo, Black Violin has toured with Linkin Park's lead singer Mike Shinoda throughout the country and abroad, performed at the NFL Kick off party with 'Diddy'...

Wil-B
Wil-B 'Simply Sick' age 26, attended Dillard High School of Performing Arts, and attempted to join the school band in efforts to play the saxophone. At the age of 13 he was mistakenly put into the string program instead of the band; but as luck would have it he mastered the viola and grew to love it. He has participated with local pop orchestras such as the Young Artist Contemporary Orchestra in Palm Beach, Florida. Not only is this young man talented on the violin but he also can sing, play the piano, drums, trumpet and the bass guitar. His influences include some well - known musical artists such as Stevie Wonder, George Benson, Curtis Mayfield, Chaka Khan, Victor Wooten, Common, AZ, Jill Scott, and Talib Kweli.

Kev Marcus
The second master of this unique duo, Kev Marcus, age 26, also attended Dillard High School of Performing Arts. He was encouraged by his mother and teachers at the age of nine to begin playing the violin. From there he grew so intrigued by it that he couldn't let it go. He also began to participate with the local pop orchestras and was also a semi-finalist in the Sphinx National Competition for Blacks and Latino's in 2000. His musical artist influences are past great pioneers of the music world, such as Herbie Hancock, Stuff Smith, Mozart, Bach, Brahms, and Nat King Cole. Kev Marcus also has been influenced by some of today's artists such as Mos Def, Notorious BIG, Dr. Dre, The Roots, Nas, and Jay-Z.

The Movement
After high school Kev Marcus attended Florida International University and Wil B enrolled at Florida State University. At FIU, Kev met their manager Sam G and the three of them co-founded the production company DKNEX which stands for Di-Versatile Music. Their group name, 'Black Violin' is derived from the influence of a famous Jazz violinist, Stuff Smith, who changed their perspective on what the violin is really capable of. Six months before Smith's death, he recorded his most soulful solo album entitled Black Violin. His life's work was so moving that the duo decided to name their group after the most inspiring violinist they had ever heard.

'Black Violin' captivated the audience in Harlem and clinched the Showtime at the Apollo 2005 Legend title. Black Violin's notoriety has risen with their amazing performance accompanying Alicia Keys at the 2004 Billboard Awards, and by performing on the same bill with some of the industry's biggest artists. Such artists include Aerosmith, The Eagles, Stevie Nicks, Linkin Park, 50 Cent, Lloyd Banks, Kanye West, Nas, Fabolous, Ciara, Fat Joe, Lil Wayne, Tony Touch, and Miami's own Iconz and Wreckonize just to name a few. The duo also are avid producers and writers which is demonstrated on their debut self-titled album that gives the listener pop music from a violins' point-of-view. Black Violin's ardor for music and neo-classical, innovative, urban style of violin mixtures, vocals, and funk has exploded onto the music scene with the consistency of listeners wanting more and more.

The duo has also performed on the Thank God its Friday Comedy Tour, The Tonight Show with Jay Leno, Jimmy Kimmel Live, The Carson Daly Show, Good Morning Chicago, Fox News In the Morning, BET Black Film Festival, and ESPN's Jax Live Super Bowl Celebration to name a few. With events ranging from concerts, to colleges, to elementary schools, to Bar Mitzvah's, their versatility is unrivaled and refreshingly unique.