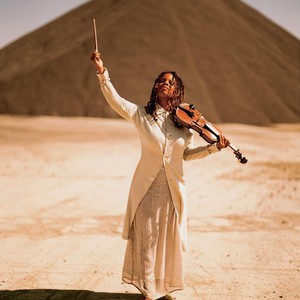 Regina Carter (born in Detroit, Michigan in 1966) is an American jazz violinist. She began as a classical violinist but became increasingly interested in jazz, and is considered one of the finest violinists in the genre. Carter attended Cass Technical High School. Carter received a degree in music from Oakland University and studied at the prestigious New England Conservatory of Music in Boston before forging her jazz career.

In December 2001, she played a concert in Genoa on the Cannone Guarnerius of Niccol? Paganini. Using the same violin, she later recorded Paganini: After a Dream for Verve Records. [1]

Active as an educator, mentor, and proponent of the Suzuki method[2], Carter has taught at numerous institutions, including at Berklee College of Music[3], and two appearances at Stanford Jazz Workshop.

She currently performs at the head of a quintet. In May 2006, she was touring with Mark Krose (clarinet), Xavier Davis (piano), Alvester Garnett (drums), and Matt Parish (bass).

Carter was awarded a MacArthur Fellows Program grant, also known as a "genius grant," in September of 2006.

I'll Be Seeing You: A Sentimental Journey

Paganini: After A Dream

Rhythms Of The Heart