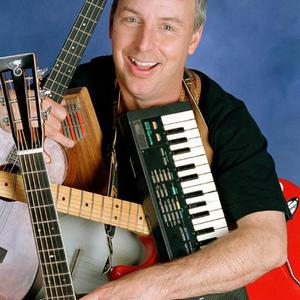 Bill Harley is a children's entertainer and storyteller who has been called "the Mark Twain of contemporary children's music" by Entertainment Weekly. He uses a range of musical styles and appeals to children and adults with quirky, heart-filled lyrics. He received the Grammy Award for Best Spoken Word Album For Children (albums consisting of predominantly spoken word versus music or song) for his albums Blah Blah Blah: Stories About Clams, Swamp Monsters, Pirates & Dogs and Yes to Running! in 2007 and 2009, respectively.

In addition to children's music, he performs at storytelling festivals around the country including appearances at the National Storytelling Festival.

In 1990, he coordinated the making of the album I'm Gonna Let It Shine, a collection of freedom songs from the us south and south africa performed by a large ensemble of singers.

Harley has also published six books. These include: Sitting Down To Eat which was selected as an American Booksellers Association Pick of the list; Sarah's Story a Storytelling World Award Winner; and The Amazing Flight of Darius Frobisher his first novel for elementary students. He is currently working on another novel and has another picture book slated for publication.[1] His newest novel, Night of the Spadefoot Toads, will be released in October 2008.

On August 12, 2008, Harley released Yes to Running! Bill Harley Live on CD and DVD. It features ten songs recorded before an all-ages live audience at the University of Montana.

50 Ways to Fool Your Mother

Monsters in the Bathroom

There's a Pea on my Plate

Down in the Backpack