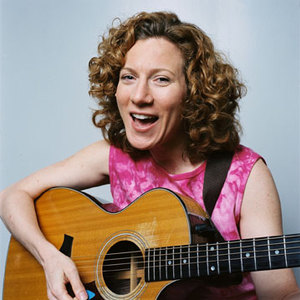 Laurie Berkner (born 1969 in Princeton, New Jersey) is a musician best known for her work as a children's musical artist. Berkner plays guitar and sings in the Laurie Berkner Band, along with pianist Susie Lampert and bassist Brian Mueller, who is also Berkner's husband. (In 2006, Mueller left the band "to pursue graduate work in psychology", and was replaced by their long-time friend Adam Bernstein.)[1]

In 1992, she began to perform as a professional rock musician, playing in an all-female cover band called Lois Lane. When she started a band that played original music, Red Onion (Berkner, Brian Mueller, Adam Bernstein and Alan Lerner), she found song-writing to be a struggle--a problem that disappeared when she started writing children's music. "Writing music for kids has not been a struggle at all," Berkner has said. "The more I started working on material for children, the more I realized that it opened up creativity in me that I never knew I had."[2]

She regularly appears on Noggin (with Lampert and Bernstein), a television network aimed at children, in music videos played between programs and on the program Jack's Big Music Show. Berkner has also appeared in Jamarama Live!, a touring music festival for children sponsored by Noggin, and in the 2006 Macy's Thanksgiving Day Parade.

In 2004, Berkner and Mueller had a daughter, Lucy, and the Laurie Berkner Band cut back on performing. "Daughter Lucy is her main audience now," her website noted.[7].

Whaddaya Think of That?