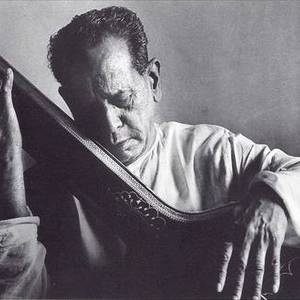 Pandit Bhimsen Gururaj Joshi (Kannada : ????? ?????? ??????? ????. Marathi: ????? ?????? ???? is one of the most popular and respected names in contemporary music. Familiar even to the musically illiterate, Bhimsen Joshi is noted for his extraordinarily rich and sonorous voice and has been ruling the musical world for over four decades. Pandit Joshi is a versatile singer; he is an expert in khayal singing but he is also adept in the presentation of thumris, songs from plays, or devotional compositions.

His lilting thumris (Jadu bhareli, Piya ke milan ki aas or Babul mora) and his innumerable popular Abhangs composed by the saints of Maharashtra are instances in point.

He was born in 1922 into a Brahmin family in Gadag, Karnataka. At the age of 11, against his father's wishes, Bhimsen Joshi ran away from home to learn music. A few years of his youth were thus spent in the company of well known musicians at Gwalior, Lucknow and Rampur, serving them and learning as much as he could from them. However, soon realising that Bhimsen was extremely talented, his father arranged for the child to be taught music under the guidance of Rambhau Kundgolkar, popularly known as Sawai Gandharva, a pupil of Abdul Karim Khan. Thus began Bhimsen's succesful journey in the world of music.

He made his debut in 1946, singing at his guru's birthday. Bhimsen Joshi has the ability to make his voice do almost anything he wants, be it a small murki, a delicate gamaka, a rapid tan, a fast flight across octaves, a controlled modulation of the voice, or simply holding a note steady for a song. His command and control over his voice seems to be complete and the dazzling display of vocal technique is unprecedented. Very characteristic to Bhimsen Joshi are his animated gestures and facial contortions which provide imagery to the abstraction of the raga in the mind of the listener. He believes that the poetic content of the lyrics are as important as the notes comprising the raga.

Bhimsen Joshi has contributed immensely to the field of Indian music. His national and international status has made classical music popular with the uninitiated. He is one of the few Hindustani classical singers listened to and appreciated by Carnatic music aficionados as well. He has created a number of ragas and raginis and also composed music for musical plays. Pandit Bhimsen Joshi has come a long way, and was honoured with the Padma Shri by the Government of India and received the Sangeet Natak Academy Award in 1975.