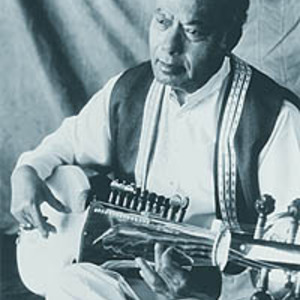 Ali Akbar Khan (1922 - 18 June 2009), born in Brahmanbaria, India (now Bangladesh), began his studies in music at the age of three. He studied vocal music from his father and drums from his uncle, Fakir Aftabuddin. His father also trained him on several other instruments, but decided finally that he must concentrate on the sarod and on vocal. For over twenty years, he trained and practised eighteen hours a day. After that, his father continued to teach him until he was over 100 years old, and left behind such a wealth of material that Khan felt he was still learning new things from it.

After his father's death in 1972, Khan continued his father's tradition, that of the Sri Baba Allauddin Seni Gharana of Maihar and Rampur, India.

Khan gave his first public performance in Allahabad at age thirteen. In his early twenties, he made his first recording in Lucknow for the HMV label, and the next year he became the court musician to the Maharaja of Jodhpur. He worked there for seven years until the Maharaja's death. The state of Jodhpur bestowed upon him his first title, that of Ustad, or Master Musician. Many years later, he received the title of Hathi Saropao and Dowari Tajeem at the Jodhpur Palace's Golden Jubilee Celebraton in 1993.

At the request of Yehudi Menuhin, Khan first visited the United States in 1955 and performed an unprecedented concert at the Museum of Modern Art in New York. He also made the first Western LP recording of Indian classical music, and the first television performance of Indian music, on Allistair Cooke's Omnibus, sowing the seed for the wave of popularity of Indian music in the 1960s.

Khan founded the Ali Akbar College of Music in Calcutta, India, in 1956. Later, recognising the extraordinary interest and abilities of his Western students, he began teaching in America in 1965. In 1967, he founded the Ali Akbar College of Music, which moved to Marin County, California, the following year. There he maintained a teaching schedule of six classes a week for nine months of the year. Khan also opened a branch of his college in Basel, Switzerland, run by his disciple Ken Zuckerman, where he taught yearly during his world tour. Khan regularly toured throughout Asia, Europe, The Netherlands, Australia, Canada, and the United States.

Bear's Sonic Journals: That Which Colors the Mind

Passing On The Tradition

The Emperor Of Sarod Live Vol. 2