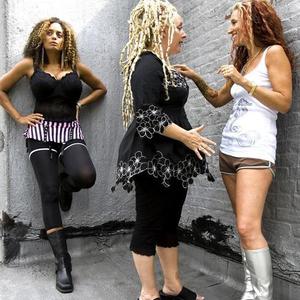 1. BETTY is an alternative rock group from New York City, The group originated in Washington, D.C. and traces its lineage to a birthday party for Dodie Bowers (the original owner of the 9:30 Club). The band's harmonies and unique lyrics attracted a cult following in the vibrant alternative music scene and among gay/lesbian audiences. A "BETTY Rules" t-shirt, an early marketing item of the band, appears on one of the AIDS quilts.
In the late 1980s the band relocated to NYC. The name of their first album, "Hello, BETTY!" comes from the standard opening for all their appearances. In 1995, the band expanded by adding lead guitar and drums to the initial line-up primarily of vocals with electronic accompaniment.
Betty appeared in every episode of the 1986 HBO Series Encyclopedia, singing educational songs each centered around a particular word, as well as performing the opening and closing theme songs. The members involved were Alyson Palmer/Amy Ziff/Elizabeth Ziff, although they were credited in the show's opening titles as simply "Betty".
In 2003 the group starred in its own off-Broadway show BETTY RULES directed by Rent's Michael Greif. The musical ran for 6 months at the Zipper Theatre. The show has since been performed in Chicago at the Lakeside Theatre and at Theater J in Washington, DC. BETTY has appeared as a regular guest artist on the television show The L Word, for which they provided the theme song.

2. Betty (???) was formed in July 2005 by ? and ??.
JaME: Tara, the former bassist of Panic Channel, left this last band because of hearing problems. After his hospitalization, he decided to create the duo Betty with Yuu, the former Never Crazy vocalist. They had taken part in only six events, but within that time they released their maxi-single Aka of which all 2000 copies were sold out.

The newly arrived reinforcements for Tara and Yuu weren't completely unknown to the music scene as Toki, formerly Tsubasa, was in Panic Channel, while Setsuki played guitar in Karen, and Kasumi took care of drums in Gimikku.

On March 13th 2006, an exceptional sold-out live celebrated the end of Betty and the beginning of 176BIZ in the well-known Takadanobaba Area. The maxi-single Shinkai ni oboreta Sakana was released on March 22nd, points out a more rebel side of the band, especially in songs such as Dekiai and Drag on downer. They went on with more lives until the oneman "the scReaM of pRiMe" on June 20th.

176BIZ spend the whole summer preparing their first album Atelier which was planned to be released in September of 2006 in two different versions. The limited version, which included a PV of the song Aqua on top of the 10-tracks regular album, was quickly sold out.

The band will participate in the Christmas 2006 celebration their label Danger Crue records organized which will take place in nothing less than the Nippon Bud?kan (10000 seats) where gathered bands as S.O.A.P, MUCC, SID, girug?mesh, Tetsu69 will also perform.