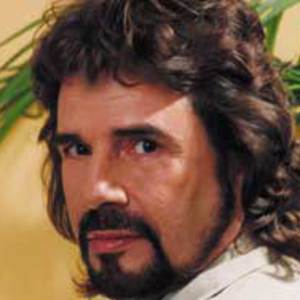 Like his great great grandfather, Johann Wolfgang von Goethe, the German poet who penned "Faust", Bertie Higgins is a storyteller. He was born Elbert Joseph Higgins of Portuguese, Irish and German descent and raised in the picturesque Greek community of Tarpon Springs, Florida. Bertie is an intellectual romantic who loves to paint story songs about living and loving in a tropical paradise. His love songs explore the efforts of man trying to fathom the mystery and allure of woman.

His love songs explore the efforts of man trying to fathom the mystery and allure of woman. His fantasy songs deal with the beauty and sensuality of the tropics and his story songs combine past experiences and future hopes. The resounding theme throughout Bertie's work: "Make the best of today lest tomorrow never comes".

Bertie, who once supported himself as a sponge diver, began his career in show business at the age of twelve as a ventriloquist. He won top prizes in local talent contests and became a favorite at school assemblies and clubs around Tampa Bay. Two years later, a battered set of drums forced a career change and Bertie set off to follow the back beat heard around the world -- Rock and Roll.

His first band played proms, homecoming dances and sock hops. After graduating Tarpon Springs High School, Bertie enrolled in St. Petersburg Junior College to study journalism and fine art, but the music continued to sing in his heart. He eventually left college and became drummer for the Tommy Roe band (Sheila, Dizzy), The Roemans, During this period, the band toured the world, opening shows for the likes of the Rolling Stones, The Beach Boys, Tom Jones, Roy Orbison, Manfred Mann, Peter and Gordon, The Dave Clark Five and many more. At the height of Beatlemania, Bertie was playing with and learning from the best.

Tiring of the rigors of the road and yearning to make his own musical statement, Bertie left The Roemans and returned home to Florida. He put down his drumsticks, picked up a guitar and began crafting music and lyrics. It was a time of great satisfaction and personal release. Producers such as Bob Crewe (The Four Seasons), Phil Gernhard (Lobo), and Felton Jarvis (Elvis) took an interest and contributed to the growth of the young songwriter. Bertie's talent flourished and he was in demand to play venues throughout the state.

Gordon Lightfoot, Cat Stevens and Jimmy Buffet were Bertie's primary sources of inspiration and he remains friends with Gordon and Jimmy today. During this period, he also met and became a protege of the late actor/director, Richard Boone, who saw Bertie's writing potential and tutored him in screen writing.

In 1980, Bertie moved to Atlanta and met record producer, Sonny Limbo. Sonny had played a role in developing the group Alabama and had been instrumental in the careers of several others. He arranged that fateful meeting between Bertie and music publisher, Bill Lowery, whom Bertie had known through Tommy Roe. The meeting of these three was destiny waiting to happen.

Bertie had been working on a song about a personal failed romance. He presented the rough cut to Bill and Sonny. They helped him perfect the lyrics of the song that became Key Largo. Bertie recorded the master and presented it to Kat Family records, a newly formed CBS distributing company. At first they rejected it. After persistent badgering by Bertie, Bill and Sonny, Kat Family finally agreed to release the single in 1981 and pop music history was made.

Key Largo blew a hole in the U.S. charts. When it reached number one in the nation, the world took notice and it went on to become an international hit. Other hit singles followed like Just Another Day in Paradise, Casablanca and Pirates and Poets. Casablanca became Song Of The Year in all of the pacific rim and the album hit double platinum. Bertie Higgins became an international recording star literally overnight.

For the past several years, Bertie and his excellent group, "The Band of Pirates" have toured extensively around the globe. He has received rave reviews and accolades from the music industry and his fans alike. He is named in the Rock and Roll Hall of Fame in Cleveland and displayed in the Georgia Music Hall of Fame in Macon. Besides being the consummate stage performer, songwriter and vocalist, he is an accomplished screenwriter/novelist and actor. Bertie has owned a successful restaurant in the Florida Keys, written music for David Letterman, Burt Reynolds and many others. He has made numerous TV talk show and music variety show appearances around the world and continues to be invited back again and again. Besides maintaining a rigorous schedule of one-nighters, he also makes regular appearances on the fabulous Las Vegas strip.

Bertie seriously supports several national charity organizations. Hospice, The American Cancer Society, The Boys and Girls Clubs of America are just a few. He regularly makes appearances and participates in several charitable national golf tournaments and donates his time and talent. He lives by the credo "you must give some back", and takes the commitment very seriously.

An ongoing project in his homestate of Florida is the preservation of fragile endangered wildlife, particularily the brown pelican and other sea birds. He works closely with zoologist, Ralph Heath of the Suncoast Seabird Sanctuary in Redington Shores, FL, and has organized and performed at several fund raisers to benefit that great organization. He has also been actively involved in preserving Florida's rapidly deteriorating lighthouses and was instrumental in helping restore the one on Anclote Key near his hometown of Tarpon Springs.

Bertie is the father of three boys and one girl, and lives with two of his sons, Julian and Aaron in Burbank, CA. His eldest son, Damian, a graduate of the University of Pittsburgh, is a world renowned recording artist in his own right. He has attained a great deal of success under the pseudonym, "Diesel Boy" and is currently working on his ninth CD release. One of the top junglist D.J.'s on the globe, he performs regularly from London, Cape Town, Budapest, Hong Kong, New York and all points in between. He has graced the cover of several national magazine publications and Bertie couldn't be a prouder Dad. Julian is a college sophomore attending film school in Hollywood learning to direct movies; Aaron is a senior at Burbank High and Kimberly holds a position with Southwest Air, the greatest airline in the world. Bertie is also the proud grandfather of Eli William Dauser, Kimberly's young son.

Bertie personally manages his international fan club, "The Boneheads" and he is endeared to each and every member. He truly believes that they are just the greatest group of people in the world and hovers over them with a watchful, caring eye. Once annually they fly into Florida from around the world to participate in their "Pirates of the Caribbean" cruise. Always a seven day adventure with a major cruise line, they hang out, party, explore the Caribbean and meet 'n' greet each other. 'Tis always a pillage and plunder and the next one is soon forthcoming.

To be certain, it will always be just another day in paradise for Bertie Higgins and he'll be waiting for you under the next palm tree for years to come. This pirate and poet continues to write and sing about turquoise lagoons, golden sands and islands in the sun in a style he affectionately refers to as Trop Rock.

Back to the Island

Just Another Day In Paradise (Vinyl)

Just Another Day in Paradise