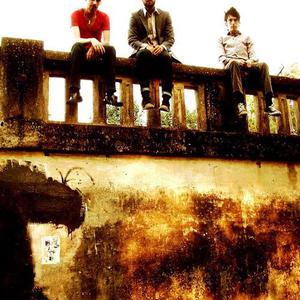 once upon a time there was a boy called jonathan. this boy had ideas, ideas that ran around in his head like sparrows in an autumn cluster of maple trees. but, as any boy or girl that has great ideas knows, one needs help to bring these ideas to life. so the boy called jonathan searched near and far for other musical people that would help him in bringing his ideas to life. in his perilous travels he thought of a very musical boy named joshua. jonathan knew him from his childhood. and then jonathan remembered his friend jared.

he remembered the fantastic journeys they had taken together in the past, and decided that jared would be a perfect companion on his new musical endeavour. but the unit was not complete, until jonathan met another musical boy called ryan. so ended jonathan's search for the ideal partners in the realiazation for his whimsical ideas, ideas that would hopefully meet people, and touch them, and change their feelings about life and they called it BERNARD. but not long after, joshua was met by a flock of angels and he was swept away by these angels just like enoch was. this did not deter bernard, however, and they played their little songs of life and beauty for anyone who would listen. and they decided this was a very good thing...

BERNARD disbanded in November of 2006. The members have since gone on to establish two new musical endeavours Sunbears! and A slight breeze.


+with unmatched ambient melodies and soaring emotion driving each note, a more superb debut release could not have been produced from this band... the bottom line is, a view beyond the cave is a masterpiece - TAKINGREFUGE.COM
+this lil disc is full of that kind of stop-what-youre-doing beautiful music that doesn't come around too often... fans of mute math, coldplay, muse, and white album-era beatles fans should lock into this bright and brilliant disc - DOUG VAN PELT, HM MAGAZINE
+one of the years few must have discs - GRACEHOTEL.NET
+atmospheric rock that rises and falls in the most beautiful ways - INFUZE MAGAZINE
+lush atmospherics, lulling vocals and killer guitar riffs and progressions makes them one of the more interesting bands of this genre out right now - INDIE VISION
+a perfect mixture of organic and electronic - NEUFUTUR
+blissfully ambient - ALTERNATIVE NATION
+unabated blend of whimsical, precisely spoken lyrics, controlled guitar and reserved keyboard work - ADAPT
+these young men are poised to create stirring music for a long time - ASSOCIATED CONTENT
+ambient rock therapy - FOLIOWEEKLY
+trust me, you'll be hearing about these guys again - GAINESVILLE SUN