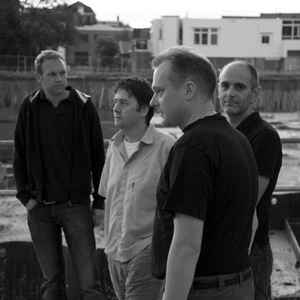 Belanov was founded in the late nineties. The band attracted attention with their contribution to the compilation album Fabulous Racers from Dutch label Zabel Muziek in 2001. After a few years of silence Belanov returned by the end of 2004 in its current formation, resulting in the four track EP We Left on the Third Day (2007). Earlier this year the first full length album Paragraph was recorded at the Eindhoven Void Studios, produced by Pieter Kloos.

The sound of Belanov is best described as atmospheric and extensive, enriched with functional vocals and carefully controlled dynamics. Sometimes rough, dark and thrilling, then again melancholic and narrative. Like an aeroplane that positions itself on the runway: dynamics develop, speed increases, and then all of a sudden the redeeming glide sets in. Eventually the sound of Belanov is meant to throw the listener into ecstasies, both on the album as well as to a live audience.

Paragraph is released on November 10 by Dying Giraffe Records.