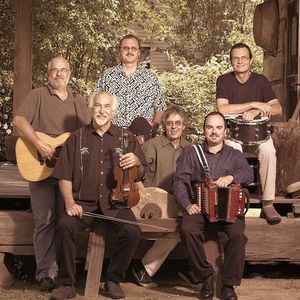 BeauSoleil is a musical group specializing in Cajun music. Based in Lafayette, Louisiana, the group members are brothers Michael Doucet (fiddle, vocals) and David Doucet (guitar, vocals), Jimmy Breaux (accordion), Billy Ware (percussion), Tommy Alesi (percussion), and Al Tharp (bass, fiddle). Founded in 1975, BeauSoleil (often billed as "BeauSoleil avec Michael Doucet") released its first album in 1977 and became one of the most well-known bands performing traditional and original music rooted in the folk tunes of the Creole and Cajun people of Louisiana.

Founded in 1975, BeauSoleil (often billed as "BeauSoleil avec Michael Doucet") released its first album in 1977 and became one of the most well-known bands performing traditional and original music rooted in the folk tunes of the Creole and Cajun people of Louisiana. BeauSoleil tours extensively in the U.S. and internationally. While its repertoire includes hundreds of traditional Cajun and Zydeco songs, BeauSoleil has also pushed past constraints of purely traditional instrumentation, rhythm, and lyrics of Louisiana folk music, incorporating elements of rock-and-roll, jazz, blues, calypso, and other genres in original compositions and reworkings of traditional tunes. Lyrics on BeauSoleil recordings are sung in English or Cajun French (and sometimes both in one song). Many BeauSoleil critics argue that the band has "watered down" Cajun music, and added unnecessary elements that present an incorrect picture of what Cajun music really sounds like.

The band's name is a tribute to Joseph Broussard dit Beausoleil, the leader of the Acadian resistance to British deportation efforts beginning in 1755. BeauSoleil was eventually captured but, following his imprisonment, managed to lead 193 exiles to Louisiana before he died in 1765.

BeauSoleil has appeared on soundtracks to films The Big Easy, Passion Fish and Belizaire the Cajun. The group plays at jazz and folk festivals and has appeared on numerous television shows, including CNN's Showbiz Today, Austin City Limits, Late Night with Conan O'Brien, and Emeril Live. BeauSoleil appears regularly on Garrison Keillor's Prairie Home Companion radio show. Keillor has hailed the group as the "best Cajun band in the world." BeauSoleil has also performed in concert with Mary Chapin Carpenter and opened for the Grateful Dead.

BeauSoleil was born at the right moment for a new band to develop along with a rebirth of interest in Cajun culture in Louisiana, and the group undoubtedly helped the expanding interest in (and, some would say, exploitation of) Cajun music and cultural symbols in the United States, France, and in many other countries.

In Louisiana in the 1950s and 1960s when Michael Doucet was growing up, the musical heritage of Acadie (French for "Acadia") had aged, withered, and certainly wasn't considered cool, even for people of Acadian descent. A turning point came when Doucet was awarded a Folk Arts Apprenticeship by the National Endowment of the Arts. "I had planned to go to graduate school in New Mexico to study the Romantic poets," he recalls on the Vanguard records web site. "Instead I traded William Blake for Dewey Balfa." Doucet sought out every surviving Cajun musician, including Balfa, Dennis McGee, Sady Courville, Luderin Darbone, Varise Connor, Canray Fontenot, and Freeman Fontenot. He studied their techniques and songs and encouraged some to resume public performances.

Recognition
BeauSoleil is one of a few groups performing traditional Louisiana music to have won a Grammy Award. L'Amour ou la Folie (Love or Folly), recorded in 1996 and released on Rhino Records, earned the 1997 Grammy for Best Traditional Folk Album. In a review on Amazon.com, Richard Gehr wrote, "By now the sextet transcends the dancehall, possessing the ability to transform nearly any traditional Cajun, Creole, or French tune into high art while preserving a clear sonic bloodline back to its roots."

In 2005, BeauSoleil's Gitane Cajun, released on Vanguard Records, earned the group its tenth Grammy nomination for Best Traditional Folk Album. A reflection of its versatility is that BeauSoleil has also earned a Grammy nomination in the Contemporary Folk category, for the 1999 album Cajunization, with songs that effortlessly span Cajun, Calypso, French ballad, blues and other musical styles.

In 2005, BeauSoleil won the Big Easy Entertainment Award for Best Cajun Band, the tenth time the band was honored in the 18-year history of the awards presented by the New Orleans music and entertainment publication Gambit Weekly.

In 2005, BeauSoleil founder Michael Doucet was one of 12 artists awarded a National Heritage Fellowship by The National Endowment for the Arts.

From Bamako To Carencro

The Best Of Beausoleil