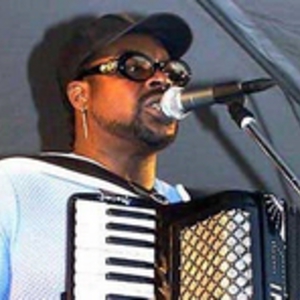 Clayton Joseph Chenier is the son of the King of Zydeco, the late Clifton Chenier, but, growing up in Port Arthur, Texas, where he was born in 1957, he had only occasional contact with his father, who lived with his wife in Lafayette. As a teenager, C.J. Thompson, as he was known then, going by his mother's last name, had little interest in zydeco. He was, however, a talented musician who played saxophone and keyboard, so that in 1978 when his father needed a sax player to fill in on a long road tour, he called on his son.

He was, however, a talented musician who played saxophone and keyboard, so that in 1978 when his father needed a sax player to fill in on a long road tour, he called on his son. C.J. Thompson quickly embraced the world of zydeco, his father's world, and went on to learn to play the accordion and also decided to have his last name legally changed to Chenier.

As his health began to fail, Clifton Chenier let his son sit in for him, and when he died in 1987, C.J. Chenier became the leader of the Red Hot Louisiana Band. As he told Michael Tisserand, he does not try to imitate his father's playing directly: "I play it the way I play it. All he really told me was to do the best I could do with my own style." But, like his father, the only accordion he plays is the piano accordion, an instrument that allows him more freedom than the button accordions used by most zydeco bands today. He can express himself musically in many styles or combinations of styles?ballads, waltzes, blues, boogie, rock and roll, funk, jazz?it all comes together as C.J. Chenier's fingers race up and down the keyboard, what one reviewer describes as "red hot rhythms and soulful grooves." In addition to his own interpretations of songs from different genres and his father's songs, C.J. Chenier has also written a number of original songs.

The Desperate Kingdom Of Love

My Baby Don't Wear No Shoes