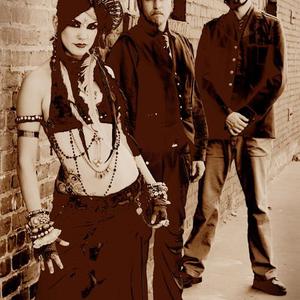 Growing like wildfire under the canopy of live electonica and world roots music comes a masterful merge of modern technology, live instrumentation and seductive performance, built of brass bands and glitch, string quartets and dubstep: the musical trio Beats Antique.

Since the group's inception from the eclectic underground of San Francisco's performance art scene, Beats Antique has been notorious for making it nearly impossible to sit still. They meld their mediums as attentively as they fuse the cultures that inspire their sound. All self produced and composed, the trio creates a unique collage: an animalistic, raw musical event that blurs the lines between the provocative, the spiritual, and the artistic, while still maintaining an allegiance to the muses of class and beauty.

The journey that led to Beats Antique today was a winding and twisted path from the west coast to the ancient trade routes of the silk road. In this modern incarnation, the musical alliance of producers David Satori and Tommy Cappel is inspired and emphasized by their collaborative partnership with world-renowned belly dance performer and music producer Zoe Jakes.

David Satori and Tommy Cappel both trained classically before venturing to locations such as Bali, West Africa, Serbia and beyond. With extensive backgrounds in multicultural music production, and the passports to prove it, Satori and Cappel command the spectrum of live and digital instrumentation, born from Hip Hop and old school jazz.

Zoe Jakes adds a third dimension as the multi ?cultural and ?disciplinary dance counterpart to Beats Antique's sound. Jakes has worked with 2 major dance troupes, Miles Copeland's Bellydance Superstars and Rachel Brice's Indigo Belly Dance Company, a student of ballet and contemporary techniques. Jake's additional history with Cappel in the Extra Action Marching Band and the Yard Dogs Road Show grants some insight into the caliber of performance that is Beats Antique's standard.

All of this sets the scene for Beats Antique's overtly ambitious stage show, a sensory overload conquest of the festival circuit's most riotous events, such as Lollapalooza, Austin City Limits festival, and Outside Lands, as well as a catalog of proper tours that include Bassnectar and a recent run with Les Claypool of PRIMUS in early 2010. According to Satori, the trio is excited by their ability to create a huge sound from their relatively small setup. ?It gives us this whole new world of musical opportunities that we're just starting to scratch the surface of.?

In a prolific 3 years since Beats Antique emerged, the group has released 2 albums and a pair of EPs, with a third album, Blind Threshold, on the way. Notable features of the new release include vaporous violins and Danny Elfman-esque dementia; glitchy, laser-guided harmonica provided by Blues Traveler frontman John Popper; and 2 very different vocal tracks that range between restless pop hooks and vibrant Eastern European dance loops. All wrapped into an intricate collection of heavy beats and sub bass.

Beats Antique is best imagined as an innovative creature built from the cumulative heritage of the world's music chasing its tail. However vivid that image, when a marching band groove crashes into bluesy folk chords only to be accompanied by electronic beats and Middle Eastern melodies, you'll still be surprised.

A Thousand Faces - Act I