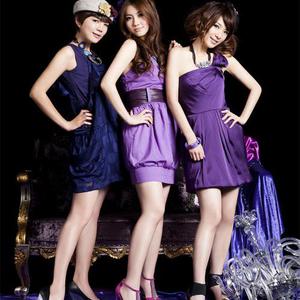 S.H.E is a Taiwanese girl group whose members are Selina Jen, Hebe Tian, and Ella Chen. The name of the group is an alphabetism derived from the first letter of each member's name. Since releasing their first album Girls Dorm (2001), S.H.E has recorded 10 albums with sales totalling over 4.5 million, and set ticketing records in each of their two concert tours. The group has acted in seven drama series, hosted two variety shows, and contributed 10 songs to six drama soundtracks. S.H.E has endorsed more than 30 companies and products, including Coca-Cola and World of Warcraft.

Thanks largely to S.H.E's success, other Taiwanese record labels began forming their own girl groups.

In 2000, Jen, Tian and Chen signed up for a singing contest, and the winner, Ren, was awarded a record contract. Tian and Chen, who were both finalists, joined Ren to form S.H.E. The trio frequently covers songs by other artists, and performs original compositions. The group produces albums under the HIM International Music label. Avex Asia distributed S.H.E's music in Hong Kong, but transferred this role to WOW Music in 2007. EMI Music China is the distributor in Singapore and the People's Republic of China.