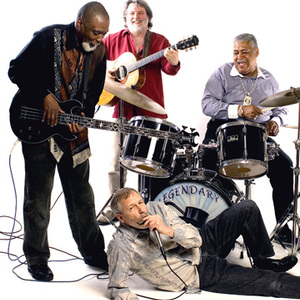 The Siegel-Schwall Band is a blues band from Chicago, Illinois. The band was formed in 1964 by Corky Siegel (harmonica) and Jim Schwall (guitar) and still tours occasionally. Corky Siegel and Jim Schwall were both music students at Roosevelt University, where Siegel studied saxophone and Schwall studied guitar. Schwall's background was mostly in country music, while Siegel was more interested in blues.

Corky Siegel and Jim Schwall were both music students at Roosevelt University, where Siegel studied saxophone and Schwall studied guitar. Schwall's background was mostly in country music, while Siegel was more interested in blues. They combined these two genres, producing a lighter sounding blues as compared to Butterfield Blues Band or John Mayall. The Siegel-Schwall Band included Shelly Plotkin on drums and Rollo Radford on bass. Radford had previously played with Martha And The Vandellas and Sun Ra.

In 1965, Sam Charters signed the band to Vanguard Records. In 1966, the band released their first eponymous album, and began a national tour in 1969. While they weren't as commercially successful as Butterfield or Mayall, the band was still able to perform at large venues such as Fillmore West. Also around that time, the Siegel-Schwall Band became the first blues band to ever perform with a symphony. They performed "Three Pieces for Blues Band and Symphony Orchestra" with the San Francisco Symphony Orchestra. The piece was written by William Russo and conducted by Seiji Ozawa. After four albums with Vanguard, the band signed with Wooden Nickel, a Chicago label distributed by RCA. Their first release on the label won a Grammy Award for Best Album Cover in 1973.

The band broke up in 1974 after releasing the album R.I.P. Siegel/Schwall, and reunited in 1987. Alligator Records signed them and released a live reunion album in 1988. The band continues to tour occasionally, usually during summer because Jim Schwall is now a professor of music. Schwall also ran unsuccessfully for mayor of Madison, Wisconsin. The Siegel-Schwall Band released a second album on Alligator Records in 2005, entitled Flash Forward, which was a top 15 hit on the Billboard Blues Albums chart.