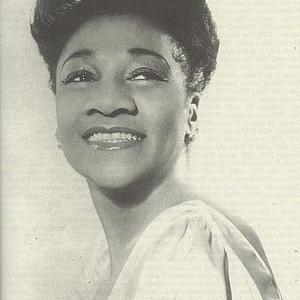 Alberta Hunter (April 1, 1895 - October 17, 1984), was a celebrated African-American jazz singer, songwriter and nurse. Born in Memphis, she left home while still in her early teens and settled in Chicago. There, she peeled potatoes by day and hounded club owners by night, determined to land a singing job. Her persistence paid off, and Alberta began a climb through some of the city's lowest dives to a headlining job at its most elegant night spot, the Dreamland Caf?.

Born in Memphis, she left home while still in her early teens and settled in Chicago. There, she peeled potatoes by day and hounded club owners by night, determined to land a singing job. Her persistence paid off, and Alberta began a climb through some of the city's lowest dives to a headlining job at its most elegant night spot, the Dreamland Caf?. Her career flourished as both singer and writer (her songs include the memorable double-entendre number "(My Man is Such a) Handy Man" in the 1920s and 1930s, and she appeared in clubs and on stage in musicals in both New York and London. She was active as a volunteer during World War II.

Following the War, her career lost momentum. By the early 1950s, the death of her mother and career frustrations caused Hunter to abandon the music industry. She prudently reduced her age, "invented" a high school diploma, and enrolled in nursing school, embarking on what was apparently a highly fulfilling career in health care.

She was working at New York's Goldwater Memorial Hospital in 1961 when record producer Chris Albertson asked her to break an 11-year absence from the recording studio. The result was her participation (four songs) on a Prestige Bluesville album entitled "Songs We Taught Your Mother." The following month, Albertson recorded her again, this time for the Riverside label, reuniting her with Lil Armstrong and Lovie Austin, with whom she had performed in the 1920s. Ms. Hunter enjoyed these outings, but had no plans to return to singing. She was prepared to devote the rest of her life to nursing, but the hospital retired her in 1977, when they believed her to have reached retirement age (she was in fact well over 80).

Bored by inactivity, Alberta Hunter decided to resume her singing career, because she "never felt better." In 1978, at the suggestion of Charles Bourgeois, restaurateur Barney Josephson offered Ms. Hunter a limited engagement at his Greenwich Village club, The Cookery. She accepted and a two-week gig proved a smash when people started flocking into The Cookery as never before, and the comeback garnered generous media attention. Two weeks stretched into an open-ended engagement that made Alberta Hunter a star reborn and a fixture of New York nightlife.

Impressed with the attention paid her by the press, John Hammond signed Alberta Hunter to Columbia Records. He had not previously shown interest in Ms. Hunter, but he had been a close associate of Barney Josephson decades earlier, when the latter ran the historic Caf? Society Uptown and Downtown clubs. Her Columbia albums, "The Glory of Alberta Hunter," "Amtrak Blues," and "Look For the Silver Lining", did not do as well as expected, but sales were nevertheless healthy. There were also numerous television appearances, including a memorable appearance on To Tell The Truth (in which panelist Kitty Carlisle had to excuse herself, the two having known each other in Hunter's heyday). There was also a walk-on in "Remember My Name", a film for which director Robert Altman commissioned her to write music. As capacity audiences continued to fill The Cookery nightly, concert offers came from Brazil to Berlin, and there was an invitation for her to sing at the Carter White House. At first, she turned it down, because, she explained, "they wanted me there on my day off," but the White House amended its schedule to suit the veteran artist. During that time, there was also a visit from First Lady turned book editor, Jackie Onassis who wanted to sign her up for an autobiography. Unhappy with the co-author assigned to the project (a chatty, overly religious former Miss America), the book was eventually done for another publisher, with the help of writer Frank Taylor.

The comeback lasted six years, and Alberta Hunter took it all in stride; she toured in Europe and South America, made more television appearances, and enjoyed her renewed recording career as well as the fact that record catalogs now once again contained her old recordings, going back to her 1921 debut on the Black Star label. Dressed in her trademark fringed shawls and sporting vast dangling earrings, she performed with a combination of sophistication and sly bawdiness (and without a trace of false nostalgia) that charmed audiences, some less than a quarter of her age. She continued to perform with zest and wit until shortly before her death on October 17, 1984.