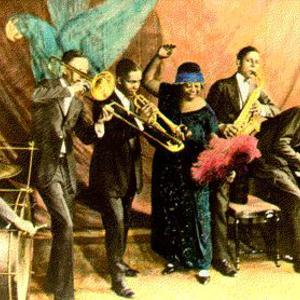 Gertrude Pridgett Rainey, better known as Ma Rainey (Columbus, Georgia, April 26, 1886 ? Columbus, Georgia, December 22, 1939), was one of the earliest known professional blues singers and one of the first generation of such singers to record. She was billed as The Mother of the Blues. She did much to develop and popularize the form and was an important influence on younger blues women, such as Bessie Smith, and their careers.

She first appeared on stage in Columbus in "A Bunch of Blackberries" at the age of 14. She then joined a traveling vaudeville troupe, the Rabbit Foot Minstrels. After hearing a blues song at a theater in St. Louis sung by a local girl in 1902, she started performing in a blues style. She claimed at that time that she was the one who coined the name "blues" for the style that she specialized in. Musicians and singers who had sang and played in the style said there were no such origins and that the blues had always been. A pioneer in the style, Bunk Johnson said that in the 1880s the blues had already been developed.

She married fellow vaudeville singer William 'Pa' Rainey in 1904, changing her name to Ma Rainey. The pair toured with the Rabbit Foot Minstrels as Rainey & Rainey, Assassinators of the Blues, singing a mix of blues and popular songs. In 1912, she took the young Bessie Smith into the Rabbit Foot Minstrels, trained her, and worked with her until Smith left in 1915.

Also known, though less discussed, is the fact that she was bisexual. Rainey never shied away from her feelings in her music, as is apparent in the lyrics of "Prove It On Me":

"Went out last night with a crowd of my friends,
They must have been women, 'cause I don't like no men.
Wear my clothes just like a fan, Talk to gals just like any old man
'Cause they say I do it, ain't nobody caught me, Sure got to prove it on me."

Rainey was outspoken on women's issues and a role model for future women entertainers who took control of their own careers.

Ma Rainey was already a veteran performer with decades of touring with African-American shows in the U.S. Southern States when she made her first recordings in 1923. Rainey signed with Paramount Records and, between 1923 and 1928, she recorded 100 songs, sometimes accompanied such jazz notables as Louis Armstrong, Kid Ory, Fletcher Henderson and others. Rainey was extremely popular among southern blacks in the 1920s, but the Great Depression and changing tastes ended her career by 1933, when she retired.

The 1982 August Wilson play Ma Rainey's Black Bottom was based on her.

Mother Of The Blues CD5

Mother Of The Blues CD4

Mother Of The Blues CD3

Mother Of The Blues CD2

Mother Of The Blues CD1

The Complete 1928 Sessions In Chronological Order