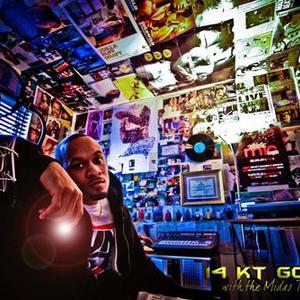 Hailing from Ypsilanti, Michigan, 1/7th of Michigan Hip-Hop heroes Athletic Mic League and 1/4th of production powerhouse The Lab Techs, 14KT is standing on the verge of something huge. He has been instrumental in boosting the careers of fellow crew members buff1 and DJ Haircut AKA Mayer Hawthorne (Stones Throw Records' newest acquisition). Now that he's produced pivotal tracks for nearly every notable Detroit Hip-Hop artist and beyond...

In Medical terms, the Golden Hour is defined as: the first sixty minutes, after the occurrence of major multisystem trauma. It is widely believed that the victim's chances of survival are greatest if he or she receives definitive care in the operating room within the first hour. "When I read this, it hit me that I felt I was in the "Golden Hour" of my career; the time between life and death. Thinking of all my disappointments, accomplishments, mistakes, failed plans, sacrificed time, relationships, confusion, lost opportunities, sound identity crisis, times of laziness and hard work, I felt like I was going thru somewhat of a major "trauma" in my music career and the next projects I put out will be like my "medicine" or "definitive care" in the operating room [the studio]."

The Detroit Experiment "The Way We Make Music" Ropeadope Records. 2003

A Friendly Game of KT