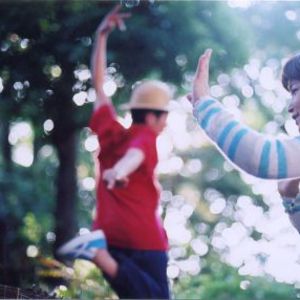 Tenniscoats are a group from from Tokyo, Japan featuring Saya and Takashi Ueno, often helped by other musicians and non-musicians. They, in turn, have performed in, or collaborated with a large number of underground bands and musicians like Maher Shalal Hash Baz (with Tori and Reiko Kudo), Cacoy (with DJ Klock of Clockwise Records), Puka Puka Brians and other artists on Tenniscoats very own Majikick label. Both Saya and Ueno also perform and release solo works. Their record label's name 'Majikick' is a combination of the Japanese word for 'serious' and the English word 'kick'.

The name 'Tenniscoats' comes from the way 'Tennis courts' sounds when rendered in Japanese. In Tenniscoats, Saya sings beautiful original melodies in a delicate falsetto and mainly plays keyboards, piano, and synths. Ueno accompanies mostly with guitar, saxophone, and occasional vocals. A lot of other instruments are also used to create their fragile pop and experimental songs.

Two Sunsets (With The Pastels)