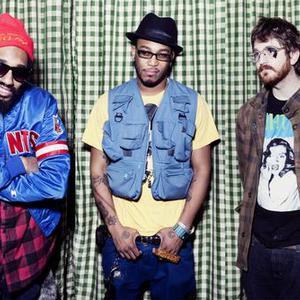 Ninjasonik is a Brooklyn-based musical collaboration created by Reverend McFly, Telli "Bathroomsexxx" Gramz and DJ Teenwolf. In 2007, they began to record original songs and put out a mixtape titled "Ninjasonik: The Mix #1" which featured demos of their recordings mixed together with a handful of eclectic artists. In August of 2007, they performed their first show and since then have performed along side a long list of amazing artists, such as Japanther, The Death Set, Spank Rock, Dan Deacon, The Cool Kids, Team Robespierre, Matt & Kim, Ponytail, Fiasco, and many more.

In summer 2008 they released their first EP on Chief Records and also performed at a handful of Rock The Bells dates opening for acts like Afrika Bambataa, DJ Blaqstarr, Murs, and B.O.B.

Musically speaking, Ninjasonik walks a fine line between rap/dance music and all out punk rock. It is not unusual to find them performing alongside rock/punk bands and usually their shows turn into a sweaty mess of people moshing to their bizarre mix of sound. They regularly cover acts like Bad Brains and Minor Threat and have also remixed acts like The Death Set and Team Robespierre.