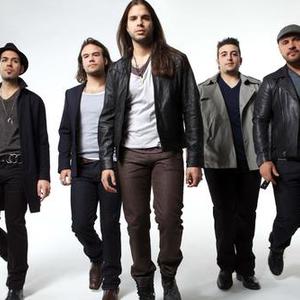 Atom Smash is the kind of experiment that we could use more of in the world. Based in Miami the band formed in a fairly unconventional manner. Producer Paul Trust first discovered Sergio Sanchez in 2006 and immediately they dove into the songwriting process. "I then found Z via an online classified," tells Sergio. "I sent him a few songs, and he quickly sent me back demos of the songs with his own twist. I was blown away, but I realized he was in Austria.

Based in Miami the band formed in a fairly unconventional manner. Producer Paul Trust first discovered Sergio Sanchez in 2006 and immediately they dove into the songwriting process. "I then found Z via an online classified," tells Sergio. "I sent him a few songs, and he quickly sent me back demos of the songs with his own twist. I was blown away, but I realized he was in Austria. He had the classified setup as if he wanted to live in South Florida. I flew him over, and a two-week vacation visa turned into a three-month vacation visa and, before you know it, we got him an entertainer visa."

Alex ?Z? Zilinski's addition was just the beginning. Dirk Hemsath of Working Group Artist Management came on board after hearing a demo at the SXSW Music Conference in 2007 and the band's lineup solidified in late 2008 when bassist Arnold Nese and drummer Mark Annino joined the fold permanently and finally in the spring of 2010 the final piece was the addition of guitarist Luke Rice. Atom Smash had been working with producer Paul Trust on the songs that would eventually comprise their Sacrifice EP. In support of the EP's release, they immediately hit the road in early 2009. Through sharing stages with the likes of Saliva, Tantric and Halestorm, Atom Smash cultivated a raucous live show, winning new fans every night.

Atom Smash harness just the right sonic chemistry on their eponymous full-length Jive Records debut. Over the course of the record's eleven tracks, the quartet pumps out one anthem after another. First single "Do Her Wrong" is loaded with rumbling riffs, calculated grooves and an unforgettable hook. Energy bubbles over as Arnold and Mark lock into impenetrable rhythms. Z's guitar curls around the grooves with screeching leads and a jagged echo, while vocalist Sergio carries massive choruses to arena-ready heights.

"Do Her Wrong" stands out for us," exclaims Sergio. "The story is pretty simple; it's an anthem for every guy out there. No matter how perfect of a girl you have and how amazing the situation could be, you could still do it wrong. She could have everything, and it still wouldn't work. It's an anthem for how foolish we can be as men."

Atom Smash's songs burst at the seams with the kind of tangible charisma that Stone Temple Pilots and Alice in Chains conjured along with a sexy, slick industrial bent a la Nine Inch Nails. Cuts like "Sacrifice" and "Naked" exude both sides of Atom Smash?the splitting heavy edge and the catchy core.

Sergio describes the band's style best. "Our sound is modern grunge. It's straight-forward rock 'n' roll with some electro thrown in for good measure. When I was around ten, my older brother started jamming a lot of Nirvana and Soundgarden, and that definitely paved the way for me musically."

Another standout, "Ashes," shows the band consciously nodding to their influences and giving some serious respect. Sergio continues, "The song really embodies all of our influences, and it lyrically celebrates the people that came before us. We're basically living on the ashes of these amazing artists that preceded us. We want to keep that spirit alive in modern music and pay homage." The band caught Jive's attention after producer David Bendeth [Paramore, UnderOATH, Breaking Benjamin] encouraged them to shop "Do Her Wrong" and "Erase Those Days" to various labels. Jive officially signed the band in January 2010, and the label instantly felt like home for Atom Smash. "Jive was the obvious choice for us," Sergio adds. "We all felt right about it and we could tell they believed in us enough to take us to the next level."

In the studio, the group translated their power-packed live show into eleven album cuts. With David Bendeth and Paul Trust behind the board, these four musicians quickly churned out a complete vision. "When we met David for the first time, he inspired us to write better songs. After the Jive deal was done, we immediately went in the studio with him. I write songs in an organic way. If it feels right and fits the mood, we go for it. We just want to write great songs that embody this particular chapter of our lives. It's a very human record, and the lyrics come from a genuine place."

In the end, it's all revealed in the band's name for Sergio. "It's a pretty simple and literal moniker. The band has a certain quality where we can break into a pop song and then on the next song I'll be screaming my guts out, performing and throwing down as hard as anyone out there. As Atom Smash, we're basically creating energy."

Passage To The Sun

Love Is In The Missile