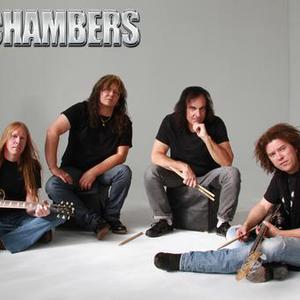 Don't you miss the days of when hard rock bands sounded like a real band? No Auto-Tune, no outside songwriters, no B.S. ? just the sound of a band rocking out in a live setting, and letting the chips fall where they may. The newly launched 9 Chambers certainly remembers these aforementioned glory days, as evidenced by an impressive amount of newly penned songs, which comprise their self-titled debut, which will drop on September 27th via Sampson Records-E-1 Entertainment.

9 Chambers is a collaboration between two respected hard rock veterans - producer/singer/guitarist Greg Hampton (who has worked with the likes of Alice Cooper, Bootsy Collins, Lita Ford, and recently unearthed Tommy Bolin recordings), and former Monster Magnet guitarist Ed Mundell.
Both recently recalled how they crossed paths and came up with the idea of working together. "I used to run into Greg at the bootleg place up at the Pasadena Flea Market," remembers Mundell. "He'd always be buying Mahogany Rush, Free, or Jimi Hendrix bootlegs!" Adds Hampton - "I would see Ed and we'd run into each other at NAMM, and we'd go have dinner. I knew he was sort of looking for other projects to get involved in, because with the Monster Magnet thing, he had a huge history."

As one of the trailblazers of the "stoner rock movement" Ed Mundell's signature guitar sound can be heard on Monster Magnet classic albums 'Superjudge,' 'Dopes to Infinity,' and gold-certified 'Powertrip.'
But by late 2010, Mundell had had enough. "It was 18 years with Magnet. Since 1992, since I was a kid, barely legal to drink I'd been on the road! The last few years of touring was just the same old thing. It wasn't treading on any new territory ? we were just playing the same set every night, all the time. And I was just like, 'I've got to do something else, I'm going to go crazy here.' So I just needed to take a break. I ran into Greg, and we started playing."

And just like that, 9 Chambers came together - the same way plenty of classic rock bands did way back when, naturally, and over the love of similar styles of music. "We just started jamming, and all of a sudden, we wrote a couple of songs," recalls Hampton. "The next thing we knew, we wrote six songs or something. It was pretty organic with the fact that we have a lot of the same guitar players that we love.
We've pretty much got the same record collection. I'd play the verse, and then hand him the guitar halfway through, and he'd play the rest of it. Sometimes, you don't even know who's playing what." And as Mundell adds, "All of a sudden, it's 20 songs later! Like, what the hell? We're mixing now and going, 'God, how many guitars are on there?' We forgot about all these cool parts."

According to Mundell, the creative process regarding songwriting is coming fast and furious for 9 Chambers. "Even the other day, we picked up two guitars, and all of a sudden, we had another song. It's like, 'How did that happen?'"

With nearly two albums worth of compositions and ideas to choose from for a single disc, Hampton already has several early favorite tracks.

"'It's hard because it's a real "album oriented" record. With "Life Moves On", the music came together because it's a real fast-cooking tune. Ed and I did the live solos on the floor with each other---the dual leads. That was the part to me that was the most exciting. The way the bridge came together was another interesting approach, because Ed was playing an electric twelve-string with a reverse pedal, and I was playing the straight part that had a completely different riff and arrangement...two completely different things that wouldnt even fit if you heard them separately . But when you put them together it was just amazing. It fit just like a glove."

"On "Bury Yourself", Vinny's brother Carmine had a band Cactus who a lot of 70's bands were influenced by. Carmine and I have been friends forever...Vinny is obvioulsy aware of his brother's work, but in regards to the riff and the music itself, it was something that reminded us of that.

There are also elements of a Cream and Mountain thing to it also. We were listening to a lot of that stuff, Armageddon, Captain Beyond. It helped keep our mindset. In the song "one Thing Missing" there are elements of that in the bridge. The solo I played on that was a one take--the first take. I plugged in, turned it on, and that was it! The title "Bury Yourself" came from a George Harrison quote. He once said that "The more you say, the more you bury yourself" He was referring to John Lennon..when Lennon made the Jesus comment and all that..."

With the song, "Know Your Enemy", the title comes from "Keep your freinds close...and your enemies closer". It's about you hear people say one thing...and mean another---words comin spilling out of your mouth. The wolves in sheeps clothing thing. It's all a gimmick to keep you at arms length so they can stick a knife in your back...It's an LA thing for sure.

Finally, with a kick-ass debut all set to go, just how confident are Hampton and Mundell about the new band? "All we know is where we are today and how the music sounds, and the potential for just walking out and kicking ass...we've got the goods to do that."

Soon everyone will be able to hear the mighty rock of 9 Chambers.