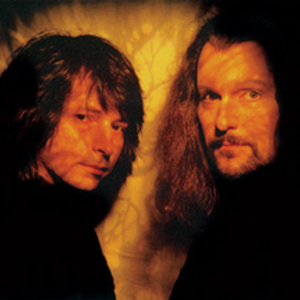 Waterbone is a musical collaboration between two very different individuals. A native of North Carolina, Jimmy Waldo is a veteran of the rock and pop world, with a long history of successful recording projects. He grew up listening to music from around the world on his short wave radio. He began playing in bands in high school, and had many successful regional touring bands. After moving to Boston in 1979 he formed the short lived but highly successful group New England, signed a major label recording and management contracts...

After moving to Boston in 1979 he formed the short lived but highly successful group New England, signed a major label recording and management contracts, touring with Kiss, Cheap Trick, Heart, and dozens of others and had a blockbuster radio hit, ?Never Gonna Lose Ya?. In 1983 he founded the seminal group Alcatrazz, and with Yngwie Malmsteen and Rainbow's Graham Bonnet, they broke new ground in the progressive rock arena. He has written music and worked with such notable names as Eddie Kramer, Todd Rundgren, Peter Frampton and many others, and produced music for film and TV.

D. Kendall Jones is a classical composer from Louisiana, having attended the Berklee College of Music in Boston and UCLA. He is well known for his extraordinary guitar playing, which combines classical structure with a hard hitting rock style. In addition to music, Jones is skilled in fine arts and design. He has composed music for numerous films and television commercials, is a master computer programmer, composer, and accomplished classical and rock guitarist, and lives in Denver, Colorado with his wife Judy.

Together they bring their diverse backgrounds and talents to form what the critics are calling, ? a warmth and trippy originality to the normally sterile world of predictable beats.? - Rolling Stone.