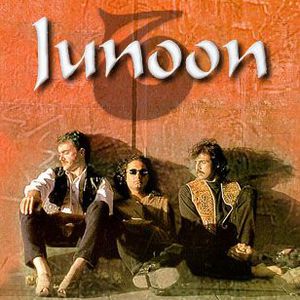 Junoon (literally "obsession" in Urdu) was a rock band from Pakistan, formed in 1990 by guitarist Salman Ahmad, keyboardist Nasrat Hussain and singer Ali Azmat. American bassist Brian O'Connell replaced Hussain in 1992, completing the line-up that would remain in place until 2003. Their early albums are in the style of classic rock n' roll, albeit with Urdu and Hindi lyrics and eastern touches like the tabla.

They eventually ventured into sufi-rock on their albums Azadi and Parvaaz, gaining commercial success across Pakistan and India and critical acclaim. They often borrowed great sufi poems as lyrics, marrying them with their already complex east-west fusion sound. Their later albums Ishq and Dewaar featured synth elements.