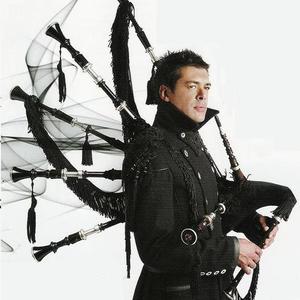 Jos? ?ngel Hevia Velasco was born in Villaviciosa, Asturias (Spain) in 1967. He first came into contact with the bagpipes when he was four years old during a procession in Amandi when he was with his grandfather. It was there that the image of a man and his bagpipes had an impact on the very young Jos? ?ngel. The unity between the pipe player, his music and the instrument seemed magical to him. Hevia then began bagpipe classes three times a week after school. He took the bus to Gijon, where Armando Ferdandez taught him in the traditional style and then accompanied him back to the bus.

He arrived home at midnight and the following day practised what he had learned in class so that he hardly had time for other leisure activities. The same year in which he began classes, he underwent a baptism of fire in sporadic performances with folk groups. His sister, Maria Jos?--noticing that a drummer accompanied all bagpipe players--wanted to participate. One of the best drummers in Villaviciosa, Sabino Cifuentes, agreed to tutor her in all the traditional rhythms. At the end of class Hevia took his bagpipes and played songs so his sister could try to accompany him.

Shortly after, they began performing together throughout Asturias and traveling to different Asturian centres overseas. In 1985 Jos? ?ngel began to give classes and shortly afterwards formed a bagpipe band with his pupils. Thus, without abandoning the traditional pair of bagpipes and the drums, a new period in his life had begun. During this time, the bagpipes had suddenly become popular amongst young Asturians and music schools sprung up in a multitude of places. Jos? ?ngel himself founded new schools in Villaviciosa, Cand?s, Ribadeselia and Mieres, out of which came new bagpipe bands. During this time he also performed in various folk groups and collaborated in a variety of recordings.

Meanwhile he was studying Spanish Philology at university, but his real vocation continued to be music and the bagpipes. In that same year he developed the midi-bagpipes. This initiative was started by trying to solve the problem that all pipe players have when they are practising at home: that of disturbing the neighbors. To this end he and Alberto Arias, one of his pupils who was a computer programmer, created a kind of plastic scale with the pulse buttons of a slot machine. This eventually became the midi-bagpipes, which in the end has become emblematic and indispensable in his work. The electronic technician Miguel Dopico also worked as part of his research team.

In 1997 Jose ?ngel began his career as a soloist. He recorded his first album "Tierra de Nadie," which was his first great success both on a national and international level. His album, backed by a world tour, was released in more than 40 countries, reaching first place on the charts in many places. More than 2,000,000 albums were sold , winning a multitude of gold and silver discs in countries as diverse as Italy, Hungary,New Zeland, Belgium, Denmark and Portugal. In 2000 he released his second album "Al Otro Lado - Al otru llau." The following year he accomplished his dream and started a musical instrument factory in Guadarrama. He currently alternates the management of this initiative with his music.

The Other Side (Al Otro Lado)