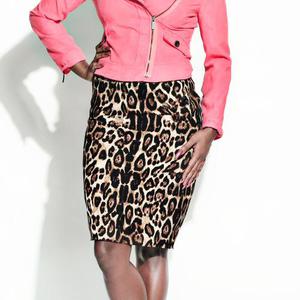 In June 2010, Le'Andria was crowned BET's (Third Season) Sunday Best winner, with over 2 million votes from the network's faithful viewers. Each week she wowed viewers and captured the hearts of millions, including Sunday Best's host Kirk Franklin, judges, Mary Mary, Donnie McClurkin, and Yolanda Adams and celebrity mentor Kim Burrell. For the finale, she performed a medley of three songs, ?I Love the Lord,? ?He Was There,? and ?In the Midst of It All.?

Le'Andria is a living testimony of faith. Prior to being crowned Sunday Best, Le'Andria auditioned for the gospel competition a day before she lost her home in foreclosure. Deciding to let nothing stand in her way, the then Sunday Best hopeful traveled to New Orleans and auditioned in flip flops and gym socks, she was almost eliminated because she did not look the part, according to show judge Erica Campbell [Mary Mary]. After her rendition of ?This Is the Day the Lord Hath Made,? she was on her way to fulfilling her life-long dream of a career in music.

Signed to Music World Gospel in a joint venture with BET with the Sunday Best brand, Le'Andria released her debut project, The Awakening of Le'Andria Johnson on September 6, 2011. Le'Andria's new single, ?Jesus? is produced by GRAMMY? Award winner Chuck Harmony (Rihanna, Fantasia, Chrisette Michele). ?Jesus? is an urban contemporary song, with traditional gospel roots. In it, Le'Andria offers a soulful and stirring testimony about the difference Jesus has made in her life, and she makes an impassioned plea to the listener to turn to Jesus and ?call Him like you want Him, call Him like you need him.? The song is a showcase for Le'Andria's unique combination of power, skill and reverence, which made her a favorite of Sunday Best fans. Le'Andria loves the single and its message, and she believes her fans will be blessed by it. She is excited about all the songs on the CD and can't wait to perform them for audiences around the world. She hopes that her songs will make a difference in people's lives.

Le'Andria is an accomplished songwriter, producer and praise and worship leader at her hometown church, HQ Ministries in Altamonte Springs, Florida. A self-taught musician, she began singing at the age of two. She continues her commitment to the music ministry of her hometown church.

?We can't just reach in the circle, we have to do like the Bible says?go out and compel them to come in,? she says. A licensed minister, Le'Andria believes that singing is her God-given talent, but that ministry is her calling. As the season three winner on Sunday Best, she now has the platform to touch countless lives by doing both.

Le'Andria currently resides in Orlando, Florida and is a single mother of three children.

The Evolution Of Le'andria Johnson

The Awakening Of Le'andria Johnson