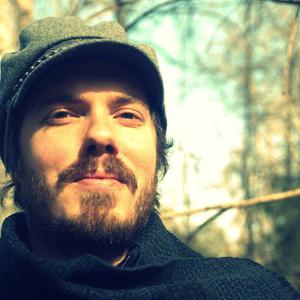 Josh Garrels has been a lot of things: son of a hippie commune, skater boy, suburban drug dealer, music/design student, coffee roaster, urban shepherd, and now nation- and globe-trotting minstrel of hope and healing. He is also a beacon of light in a marketplace rife with artists who, whether wanting to acquire fame or just their next meals, have sold their souls to the not-so-almighty dollar and forsaken their first loves ? the song ? in the process.

He is also a beacon of light in a marketplace rife with artists who, whether wanting to acquire fame or just their next meals, have sold their souls to the not-so-almighty dollar and forsaken their first loves ? the song ? in the process. Garrels' rogue ethic first led him to self-record, -produce, and -distribute a trio of early recordings, Stone Tree (2002), Underquiet (2003), and Over Oceans (2006), each a holy merging of sampled beats; plaintive, soulful vocals; and earnest acoustic strumming over unabashedly lo-fi production.

Despite fielding offers from major labels, Garrels retained a marked distrust for the recording industry (and it is just that) and, with the release of Over Oceans, formed his own little label that could: Small Voice Records. He also formed a humble but subtly mighty union with one Michelle Ramsdale, whose art has accompanied his aural musings on both Over Oceans and the subsequent Jacaranda album (2008).

It was the recording and producing of Jacaranda that proved a turning point for team Garrels. Housed in an old, rural mansion ? a friend's donated respite on an Indiana river in the woods ? Josh and Michelle set to fashioning a home for themselves; crafting his best, tightest collection of songs to date; and creating a baby girl (n?e Heron Selah Garrels) all at once. The album itself became his most critically lauded so far, and the single ?Don't Wait For Me? was used in a scene on CBS drama ?The Ghost Whisperer.?

Josh Garrels' music is always equal parts confidence and vulnerability. That may seem a dichotomy ? and then you hear him. Those trademark vibrant trills, lyricism chock-full of an earthy gusto and the search for God both, and the tapping and slapping against his trusty homemade acoustic axe ? the sum of it is an amalgam of sound like precious few before or beside him.

?Fight or flight? is simplistic phrasing for the choice we often have in life's trying situations. In his gritty formative years the former there was Josh Garrels' strategy, but since his coming of age (and of belief) and his entrance into bona fide adulthood, within and without, his modus operandi has become flight. Flight as in lift-off, ascension. Rising above. Yea, the name of his young daughter is shared with a bird. Flight is a fixture, and wings a metaphor, in both the love story that Josh and Michelle grew and in the visual and musical arts that both have cultivated.

?My hope is to record at least an album a year for many years to come,? Garrels says, ?probably continuing to record myself with my own home studio.? To borrow another well-worn axiom: If it's not broken, don't fix it. A minimalist website and album sales at live shows eventually thrust Josh Garrels into the arena where he now resides.
Garrels has always sought to inject his ears and his mind with a wide swath of influences. Early on it was Cat Stevens and De La Soul, and then those gave way to honchos of east-coast hip-hop the likes of the Wu-Tang Clan and A Tribe Called Quest. The mellowing ? and yet, ironically, the lionizing ? of his head, heart, and soul are evident in his budding young-adult affinities for the sounds of Bob Dylan and Digable Planets, Ben Harper and Gustavo Santaolalla.

Despite being his cherished mentors of music, none of these established artists would make Garrels blink were he to meet them. ?In a media-saturated pop culture society where ?stars' are the royalty to be worshipped or fawned over, I believe the true role of artists is to serve others with their creations, ? Garrels says. ?That means to draw people to fullness of life through revelation, longing, breakthroughs, simple beauty, and unpretentious truths. Artists help people see the obvious, the heart of the matter, and from this regained perspective people become more fully human. So much art these days has people focusing on an unattainable fantasy, lusting over what they'll never have unless they take it by force or by way of money or libido. This is all candy, and candy can't make a man healthy.?

Indeed, and ?candy? is the last word for describing Josh Garrels, his life and his tunesmithing. He harmonizes and he freestyles, apt to lift a glitch beat or an accordion to the song at hand, whatever it demands. His latest, Lost Animals (2009), features a sonic quilt of singles, Jacaranda B-sides, soundtrack work, and collaborations. Originally intended as an EP, it outgrew those trappings and emerged a full-length weighing in at 10 songs.

As outgrowing goes, native Michigander Garrels and his family shed their initial digs in Indianapolis, that urban epicenter of gorgeous, golden cornfields, and took to North Carolina for a year to grieve with dear ones a death in the clan. Heartfelt time spent in Carolina bowed out gracefully to their nascent residence in Portland, Oregon, specifically the diverse and progressive artists' haven that is the Mississippi/Alberta district.

For all the beats and world instruments and innovative guitar work, it will always be about the words with Josh Garrels. His stuff is drenched in musings that encompass time-worn theology and pastoral wonderment, that delight in the fauna of this world and a faith in another still to come. ?Has this world been so kind to you that you should leave with regret? There are better things ahead than any we leave behind.? So said the writer C. S. Lewis, and so echo the visceral yearnings, sometimes verbose yet often as unintelligible as the melodies on some of his best tracks, that make up this well-traveled troubadour's trunk full of songs.

?Bread, wine, water, oil, good fruit: These will help heal humanity, and my hope is to help serve some of these,? Garrels says. ?I'm not always sure of myself, my aesthetic, my poetry, my decisions, but I do know that this is my pursuit.?

There's real beauty in that.

Peace To All Who Enter Here

The Light Came Down

Love & War & The Sea In Between