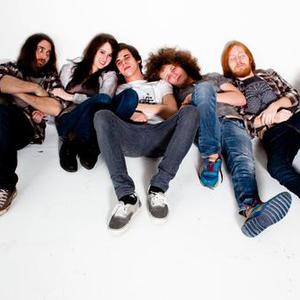 Sleeper Agent is an American band from Bowling Green, Kentucky, created in 2009. Their debut album, Celabrasion, was released on September 27, 2011, following the digital release of the album in August. Rolling Stone magazine noted the group as a "band to watch" prior to the LP's release. The group's name refers to "Battlestar Galactica". History After a few "unremarkable gigs" as a musical duo, guitarist Tony Smith and drummer Justin Wilson recruited Alex Kandel after discovering her working as a barista, "doing Adele covers on open mic nights.

After a few "unremarkable gigs" as a musical duo, guitarist Tony Smith and drummer Justin Wilson recruited Alex Kandel after discovering her working as a barista, "doing Adele covers on open mic nights." The band then became the current lineup recruiting Williams, Gardner, and Martin. Soon after they were discovered by producer Jay Joyce, who prompted them to record their debut LP Celabrasion, which was released through iTunes on August 2, 2011, followed by a physical release on September 27. The first single from the album, "Get It Daddy", was featured as iTunes' "Free Single of the Week" in late July/early August of that year. They are currently touring with Cage the Elephant as of November 2011.

They will be playing the Coachella Valley Music and Arts Festival in Indio, Calif., on April 15 and 22, 2012.

The band's official Facebook profile lists a number of bands as their influences, including The Pixies, The Black Lips, Foxy Shazam, and Cage the Elephant, the latter being another part of the growing Bowling Green, KY music scene and close friends with the band. Rolling Stone described the band as "Shaggy Kentucky kids whose songs are sweet, fizzy and combustible as a can of shook soda."

The band's spontaneous, energetic sound can be traced to an incident at a Fourth of July party, when drummer Justin Wilson was "sucker punched" by the drummer of a rival band, inspiring Wilson to channel aggression and his punk attitude into his playing.