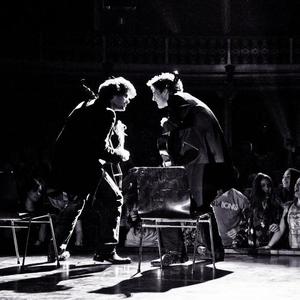 In January 2011, Luka &Scaron;uli?, along with friend and fellow cellist Stjepan Hauser, performed a cover of Michael Jackson's Smooth Criminal which was played solely on cello. They uploaded it on Youtube under the nickname 2Cellos. In just a few days, the music video became a YouTube sensation. The Smooth Criminal Songfacts states that they appeared on the Michael Jackson-themed January 31, 2012 episode of Glee performing the song with Naya Rivera and Grant Gustin. ?uli? and Hauser's debut album with Sony Music Entertainment was released in mid June, 2011.

On April 25, 2011 ?uli? and Hauser appeared live in Ellen DeGeneres Show on which they performed Smooth Criminal. As a result of 2Cellos' newfound success, English singer-songwriter Elton John asked the duo to appear with him on his summer tour, which began in Cardiff on 8 June 2011. John, who personally called ?uli?, said that he had watched the "Smooth Criminal" video and wanted 2Cellos to participate in the thirty-city tour. As of March 2012, the duo was still touring with Sir Elton John.

[As found on Wikipedia]

Let There Be Cello

The Show Must Go On (CDS)

Every Teardrop Is A Waterfall (CDS)