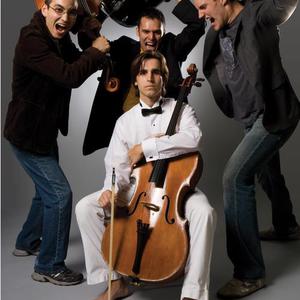 Break of Reality (BoR) is an American instrumental rock band consisting of three cellists and a percussionist formed in 2003. The group is associated with the terms ?cinematic rock?, ?cello rock?, and ?heavy cello thunder?. Break of Reality's current members, starting from 2009 are Patrick Laird, Martin Torch-Ishii, Ivan Trevino and Laura Metcalf. The band's sound consists of many musical influences, such as heavy metal, classical, and indie rock, and expresses a wide range of emotions.

The group was formed while the original members were freshmen at the Eastman School of Music, Rochester, New York. At the time of its formation, the band consisted of four cellists. The band gave their first formal concert in a small classical venue at Eastman, where they received complaints for being too loud.

The band soon began performing at local coffee shops and clubs in Rochester, such as Javas Coffee, Spot Coffee, and The Bug Jar.

In 2006, the band released "The Sound Between", a double disc album featuring both electric and acoustic songs. After all graduating from Eastman, the group collectively moved to NYC in 2007. The band split on 2007, leaving Laird and Trevino as the remaining members.

In 2008, Laird and Trevino began composing and recording music together, much of which is featured on the band's latest album entitled "Spectrum of the Sky", which was released in May 2009.

Laird and Trevino have been joined by Philip Borter, an Eastman School of Music alum, and Martin Torch-Ishii, a doctoral student at The University of Michigan. Borter was later replaced by Laura Metcalf. The band

Spectrum Of The Sky

The Sound Between (EP)