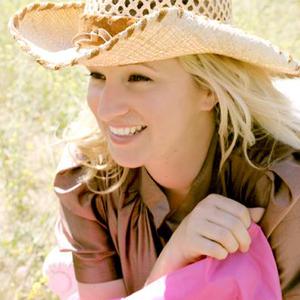 Crystal Lewis (Born September 11, 1969 in Corona, California) is the name of an American Gospel Vocalist. In 1984, at the age of 15, Lewis auditioned for a children's musical called Hi Tops, written and produced by Ernie and Debbie Retino, creators of Psalty, the Singing Song Book. Lewis passed the audition and was able to go into the studio and participate in the Soundtrack recording with the rest of the cast members.

While working with the musical, Lewis met a member of the Rockabilly band, The Lifters. After becoming friends with the members of that band, Lewis was asked to join. Soon after, the band changed its name to Wild Blue Yonder. Lewis also met her current husband, Brian Ray, through her association with the band.
Wild Blue Yonder was together for two years and recorded a single full length album, produced by Daniel Amos frontman Terry Scott Taylor, for Frontline Records in 1986. She would also sing on D.A.'s album Fearful Symmetry in 1986, and Taylor's solo album A Briefing for the Ascent in 1987. After Wild Blue Yonder disbanded, Frontline offered Lewis a solo recording contract at the age of 17. Beyond the Charade, her first solo project, was released in 1987. Lewis went on to record two more albums for Frontline, Joy in 1988, and Let Love In in 1990, before starting her own record label, Metro One Music in 1992 with a distribution deal through Diamante Music Group.
For a brief time, Lewis starred in a Nickelodeon Television series called Roundhouse. Lewis left the show after one year.
Her next solo project, Remember, was recorded and released on Metro One label in 1992, followed by The Bride in 1993, and Hymns: My Life in 1995. The Bride was listed at # 97 in the 2001 book, CCM Presents: The 100 Greatest Albums in Christian Music. A greatest hits collection released that year landed Lewis in the # 1 spot on the Pop/Dance charts with her rendition of "Shine Jesus Shine." Beauty For Ashes was released in 1996, the first album from Metro One to be distributed through a new arrangement with Myrrh Records. Ashes was certified Gold by the Recording Industry Association of America, and the song "People Get Ready...Jesus Is Comin' " was the # 1 song of the year (1996) in Christian Radio. The album also won an ASCAP award for "Beauty For Ashes" as the most played song (1997). The album contained four # 1 radio singles: "People get ready...Jesus is Comin' ", "Beauty of the Cross", "God's been good to me", and "Beauty for Ashes."
Gold was released in 1998 and gave Lewis two # 1 hits, "Lord, I Believe in You" and "Not the Same". Gold was later re-issued that same year with a new recording of "Lean On Me" (lead vocals by Crystal Lewis), which originally appeared on Kirk Franklin's album The Nu Nation Project that included "Lean on Me" featuring Mary J. Blige, R.Kelly, Bono, Crystal Lewis and The Family. That same year, Crystal won Dove Awards for "Female Vocalist of the Year" and "Spanish Language Album of the Year" for La Belleza de la Cruz. Lewis also joined Franklin along with Gerald Levert, Mary J. Blige, and Bono on stage at the 1999 Grammy Awards for a performance of "Lean on Me."
Lewis returned to her Rockabilly roots briefly in 1999 with The Attack of the Screamin' Rays. The live project Live @ The Woodlands, recorded live in Houston, Texas on November 6, 1998, was also released that year. Crystal picked up two more Dove awards in 1999 for "Special Event Album" for her contribution to the project Exodus, and "Spanish Language Album" for Oro. In 2000, Lewis released Fearless, which was nominated for "Best Christian Pop Album of the Year" at the 2000 Grammy Awards. The song "Only Fools" from that album was voted song of the year by ASCAP. Her first Christmas album, Holiday! A Collection of Christmas Classics, went on to be voted the 5th Best Christmas album of all-time by CCM Magazine.
Crystal released her second greatest hits project More in 2001. A second live project, More Live, recorded at the Sun Theater in Anaheim, California on November 17, 2001, was released in 2002, along with another collection of hymns and gospel standards, Holy, Holy, Holy. See was released in 2005, and, the children's project, Joyful Noise was released in 2006.

Holiday! A Collection Of Christmas Classics