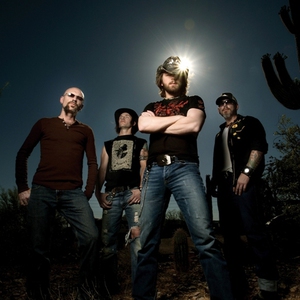 Like a big ol' 18-wheeler barreling down across the border, The Road Hammers are an unstoppable musical force, bound and determined to deliver a trailer load of the toughest, coolest, real-est country music to come down that southbound pike in a long, long time. Conceived as a side project by Canadian country star Jason McCoy and forged under the unforgiving reality-TV lights of CMT Canada's "Making the Band," The Road Hammers took on a life of its own from the very beginning.

"It was an unplanned pregnancy, and it was an experiment on camera," McCoy says with a laugh. "But we're all real happy with the baby. The thing with the TV series was this; if it flies, you've got a successful band to launch off of this thing, and if it flops, well,
everybody likes to see somebody fall."

Needless to say, The Road Hammers flew, a lot higher than anyone, even the band
members themselves, ever expected. Those band members guitarist/vocalist Clayton
Bellamy and the world class, kickass rhythm section of bassist/vocalist Chris Byrne and drummer Corbett Frasz may have come together on camera, but onstage and in the studio the Road Hammers quickly formed the kind of greater-than-the-sum-of-its-parts bond that every musican dreams of.

"The first time I saw Clayton Bellamy, he was playing in a beer tent at a Cowboy
Stampede," McCoy recalls. "I thought he was a real good player with a good stage
presence, and he was obviously a fantastic singer. Exactly what he was doing was exactly what I wanted."

With the exhilarating musical and vocal tension between Bellamy's go-for-broke, rock 'n'
roll heart and McCoy's deep-fried country soul providing the creative fuel, and the
Bryne/Frasz rhythm section hammering it all home, the band's self-titled debut album
quickly ascended to the upper reaches of the Canadian country charts, with four songs
"East Bound and Down," "Nashville Bound," "Girl On the Billboard" and "I'm a Road
Hammer" hitting the Top 10.

The latter track, a sweat-drenched, blue-collar anthem with a countrified "We Will Rock
You" groove, serves as the band's theme song and begs the musical question, "Just what is a road hammer?" It's a question for which McCoy has a ready reply.

"We always say, if you drive 18 wheels, four wheels, two wheels or a unicycle; if you
make your living on or near the highway, or if you've just got a restless spirit in your
heart, then you're a road hammer," he says. "All of a sudden we've got 20 rows deep
standing at the stage and we're going, 'Whoa, I guess we're not the only ones.'"

In 2005, the band was nominated for six CCMA awards and walked away with the trophy for Group or Duo of the Year. Road Hammers also picked up a Juno Award for Country Recording of the Year. The following year, the band received two CCMA awards
Group or Duo of the Year and Best Video for "Girl On the Billboard," their high-octane
remake of Del Reeves' #1 single from 1961. The video for the song also shot to # 1 at
CMT Canada.

"I loved Del Reeves and 'Girl on the Billboard' when I was a kid, and I knew that all it
needed was a modern twist from this band," McCoy says. "It's such a great song, and it's early rap, it really is."

Songs just don't get much more country than "Girl On the Billboard" but onstage and
on record the Road Hammers rock, and the band has quickly evolved into one of the
most respected outfits on the road. At the recent Canadian Country Music Awards in
Regina, Saskatchewan, Byrne and Fras were tapped for the CCMA's All Star Band on
bass and drums respectively, along with The Road Hammer sidemen Mike Little
(keyboards) and Kenny Greer (steel guitar).

Mixing steady-rolling standbys from Reeves and Jerry Reed and contemporary trucking
classics from artists like Paul Thorn ("Heart With Four Wheel Drive") and Lowell
George ("Willin'") with freewheeling originals like "Nashville Bound," "Overdrive" and
"I've Got the Scars to Prove It," The Road Hammers is a wild ride that covers a lot of
musical ground.

While his own decade-long career which has already produced six hit albums, 10 Top-
10 singles, and a slew of awards including Male Vocalist of the Year at the 2001
Canadian Country Music Awards and three SOCAN Song of the Year awards was
running on plenty of momentum, McCoy's restless creative spirit moved him to take to a
sharp left turn at the end of 2005, and The Road Hammers was born.

"I wasn't ready to make another solo record, and I'd had this idea in my head for a long
time," he says. "And I always thought The Road Hammers would be such a cool band
name."

When McCoy mentioned his cool band name and concept to a friend at CMT Canada and the network caught wind of what he was up to, things got real crazy real fast, with
cameras filming the fledgling bands every move, from meetings to rehearsals to
recording studio to songwriting sessions.

The show ran for two successful seasons with Hollywood actor/Vancouver native/The Road Hammers fan Jason Priestley stepping in as director for season two. The Road Hammers were pretty much conceived and born on TV. "In Canada the show certainly helped us," McCoy says. "Everybody in the country scene kind of knew who I was, but the marketing strategy was like a three-headed monster. We had a good radio campaign, we had good TV and we had good print, and it just worked."

Word of the band's success at home quickly drifted south to Nashville, and The Road
Hammers eventually signed with indie upstart Montage Music Group and headed into the studio with Jason Aldean producer Michael Knox to record some additional tracks and fine-tune their debut for American release. Those tracks, "Working Hard and Loving
You," "I Don't Know When to Quit," and "I've Got the Tracks to Prove It," perfectly
round out the project with the one-two punch of Nashville-sized hooks and that
trademark The Road Hammers intensity.

With the bulk of the album recorded in Nashville by McCoy and his longtime
co/producer/collaborator Scott Baggett, The Road Hammers put a new coat of paint on a neglected corner of country music's foundation. From Red Sovine's "Phantom 309" to
Dave Dudley's "Six Days on the Road" to Kathy Mattea's "18 Wheels and a Dozen
Roses," all the way to Garth Brooks' "Calllin' Baton Rouge," trucking songs have been a
country music constant. And this band of road hammers know from experience that
hard-touring musicians and long-haul truckers have long been kindred spirits.