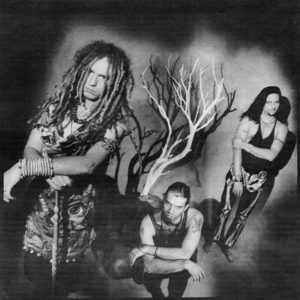 Tribe After Tribe was formed in 1984 in Johannesburg, South Africa by guitarist Robbi Robb (ex-Asylum Kids). The band released their new-wave-influenced debut album Power locally in 1985 before circumstances caused the band to take flight to Los Angeles, where after a hiatus of six years the band reemerged in 1991 with their self-titled album Tribe After Tribe, featuring both an all-new line-up and a new sound, showcasing an experimental mix of tribal African music and powerful alternative rock.

Throughout the decade, Robb released two more albums in this style, 1993's Love under will and 1997's Pearls Before Swine (the latter featuring guest appearances from Joey Vera of Armored Saint, Doug Pinnick of King's x and Jeff Ament of Pearl Jam). Together with Ament, Robb also established up the side-project Three Fish who released two albums in 1996 and 1999 respectfully.

After years of silence, in 2002 Tribe After Tribe reappeared once again with Enchanted Entrance. Influenced by Robbi's unpleasant experiences with years of poor label support and touring difficulties, the album also marks the second turning point in the band's sound. Gone are the soaring upbeat flavors of the previous albums, in its place are dark experiments with mystic rhythms, aggressive guitars, rock drums, ambient tones, industrial noise, trance chants and deep groove.

Finally in 2008, in the presence of weapons of mass destruction comes the new album: M.O.A.B., a vital and important piece of music that is truly a new testament for the troubled times of the 21st Century. Tribe after Tribe fiercely and fearlessly take on an ancient tale that, for all its inherent difficulty and divisiveness, must be subjected to the crucible of reason for critical examination before it can be rewritten with the balm of tolerance and love. In doing so, M.O.A.B. brilliantly captures both the absurdities and dangers of the diluted belief systems that have been gradually warped and twisted by all-too-human misdeeds across two millennia .. to the point where they're now on the verge of tearing our world apart.

Continuing the work they began in South Africa more than two decades ago and continuing where Enchanted Entrance left off, M.O.A.B. fuses unique world rock elements with ringleader Robbi Robb's incisive, intelligent lyrical dreamscapes, exposing the evil forces of Apartheid and its ideological brethren... forces that remain with us today, perhaps more so than ever before. The message in the music is not, however, a political one, but rather a simple signpost pointing to the common ground of the human heart which we all share; a place where all gunfire is, in essence, 'friendly fire'.

Take the title of the album itself, for example. M.O.A.B. serves a multitude of meanings, ranging from the deserts of Moab where Moses and the Israelites wandered for 40 years, committing their own form of genocide on the unsuspecting men, women and children whose only 'mistake' was worshipping a matriarchal, goddess-inspired culture, to Saddam Hussein's call for the Mother Of All Battles, to the American response with the Mother Of All Bombs, a 'Massive Ordnance Airblast Bomb'. Based in part upon the writings of the biblical book of Deuteronomy, the new songs are sure to delight the old-time faithful fans while also bringing new converts into the tribal fold.

Featuring the psychedelic guitar swirl and pulsating pagan rhythms that have become Tribe trademarks on such propulsive numbers as "Supreme One", "Burning Bush", "Truth and Reconciliation" and "Holy City Warrior", M.O.A.B. definitely brings enough rock to please even the most virulently head-banging of fans. But there are also quieter, more pastoral passages that recall nothing so much as the work done by Peter Gabriel on his Passion album, the soundtrack to "The Last Temptation of Christ"; in fact, album-ending track "World Drum" sounds like it could be an outtake from those stellar sessions. As the M.O.A.B. liner notes say, "If we put down the books and courageously journey inside and listen very carefully to our own hearts we will hear the beat of the universal heart, the beat of the World Drum. In the stillness of this inner space we comprehend the desire of every living thing. All of life wants the same thing: every plant, every animal, every Jew, Christian, Muslim, every being in every nation wants safety."

Or, as Robbi Robb, who has been hailed as "one of the greatest mystics ever to appear in the history of rock," remarks, "Put down the guns, put down the books, put away the pointing fingers of blame .. come away from the temples and into the fields, and there let us work together to eradicate disease and poverty from the face of the Earth. This is the 'Mother Of All Battles'."