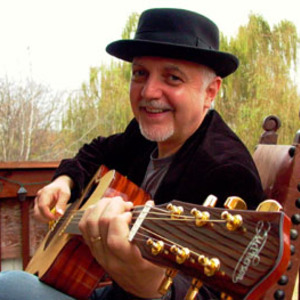 Phil Keaggy (born March 23, 1951) is a Christian guitarist, songwriter, and singer. Raised in a small farmhouse in Hubbard, Ohio with nine brothers and sisters, Keaggy began playing guitar at age ten on a Sears Silvertone guitar, despite missing half of the middle finger on his right hand due to an accident at age 4 involving a water pump. He is frequently listed as one of the top fingerstyle guitarists by Guitar Player Magazine readers' polls, but he is equally at home on electric guitar.

He is frequently listed as one of the top fingerstyle guitarists by Guitar Player Magazine readers' polls, but he is equally at home on electric guitar. Keaggy is noted for crowd-pleasing solo live performances where he makes extensive use of recording live layers of loops to accompany himself. To do this he uses only an acoustic guitar but is able to create electric sounds.

Keaggy began performing professionally in the late 60s with drummer John Sferra. The two friends, with the addition of bassist Dan Pecchio, formed Glass Harp in 1968.

Upon hearing the band perform, Merenstein was so inspired that Decca Records signed Glass Harp to a multi-record deal. A short time later, the band found itself in New York's Greenwich Village recording its first album at Jimi Hendrix' Electric Ladyland Studio with Lewis Merenstein as producer.

As a Decca Records artist, the band began to open for such artists as Iron Butterfly, Yes, Traffic, and Chicago.[1] At one point, future James Gang guitarist Joe Walsh was being considered to join New Hudson Exit (the band Phil Keaggy was in prior to the formation of Glass Harp) but the other members of the band felt Walsh's style was too dynamic.

Years later, Amboy Dukes guitar player Ted Nugent was quoted as saying "I don't know what happened to that Phil Keaggy, he could have saved the world with his guitar" in Guitar Player Magazine.

On Valentine's Day in 1970, Keaggy's mother was involved in a fatal car accident. He was heavily involved in drugs at the time, and that same day was badly hurt by an LSD trip. In the midst of this tragedy his sister Ellen took the time to tell him about finding peace in Jesus, and he converted to Christianity.

Keaggy left Glass Harp in 1972 and released his first solo album the following year entitled What A Day. Keaggy married his wife Bernadette the following summer. He then took a brief vacation from recording on his own and only toured in support of other artists like Love Song, 2nd Chapter of Acts, Paul Clark, and Nancy Honeytree. Keaggy returned to the studio in 1976 with Love Broke Thru which included his version of the Randy Stonehill/Keith Green/Todd Fishkind classic song of the same name, which at Keith Green's insistence was the first released recording of the song. During the summer of 1977 Keaggy went on an eighteen-city tour of the western United States with 2nd Chapter of Acts and "a band called David". This was captured in the live triple album How the West Was One. The only release of the Phil Keaggy Band also occurred in 1977, Emerging. The Phil Keaggy Band consisted of Keaggy, Lynn Nichols, Phil Madeira, Dan Cunningham and Terry Andersen. In 1978, Keaggy released his first critically acclaimed instrumental album entitled The Master and the Musician.

The Keaggy family then moved to Leawood, Kansas in August,1979. Their first daughter, Alicia, was born there in March, 1980. The Keaggys left Leawood in 1983 and settled in Costa Mesa, California. Their second daughter, Olivia, was born on Valentine's Day, 1984, and their son, Ian, was born in 1987.

Keaggy was signed to the Contemporary Christian music label Sparrow Records in the 1980s, where he released a string of albums including Town to Town, Ph'lip Side, and Play Thru Me. In 1988, Keaggy would team up with Stonehill, drummer Joe English (who had previously played with Paul McCartney and Wings) , singer Margaret Becker, and others for the Compassion All Star Band's album One by One.

In 1988, Keaggy won his first Dove Award for his second instrumental project, The Wind and the Wheat. Keaggy's second Dove Award came in 1992 for his Celtic-influenced Beyond Nature. From 1998 to 2001, Keaggy dominated the "Instrumental Record" category in the Dove Awards winning awards for Invention, Acoustic Sketches, Majesty and Wonder, and Lights of Madrid.

In 1989, Keaggy teamed up with Randy Stonehill, Russ Taff, Derri Daugherty, Mark Heard, Steve Taylor, Rick Cua and other musicians to create Phil Keaggy and Sunday's Child: a tribute of sorts to 1960s bands like The Beatles. That same year, Keaggy would hit the road with Stonehill for a tour by The Keaggy/Stonehill Band, which included Swirling Eddie David Raven on drums and Daniel Amos bassist Tim Chandler. In the fall of 1989 the Keaggys relocated once again, leaving the sunny shores and crowded freeways of southern California behind and moved to Nashville, Tennessee where they reside currently. A few years later, Keaggy would perform at former Beatle Paul McCartney's sister-in-law's wedding. Keaggy had met Laura Eastman, sister of Linda McCartney, while the former worked at CBN. After the wedding, Keaggy fulfilled a lifelong dream by jamming with McCartney in a bedroom at the Eastman family estate, site of the wedding.

Keaggy followed Sunday's Child in 1990 with all-out rock album Find Me In These Fields and in 1993 with Crimson and Blue, a bluesy rock album that included a cover of Van Morrison's "When Will I Ever Learn to Live in God". That album was also remixed and reissued as Blue, with the added Badfinger cover "Baby Blue". Once again, an impressive list of musicians joined Keaggy for these releases, including Steve Taylor, Rick Cua, Phil Madeira, Charlie Peacock, Sam Bush, John Mark Painter of Fleming and John, Ashley Cleveland, Jimmy Abegg, and fellow 1970s Keaggy Band members Lynn Nichols and Phil Madeira. Keaggy enlisted his old friend John Sferra of Glass Harp for the tour that followed. (The tour also featured Wade Jaynes from Chagall Guevara on bass and Phil Madeira on Hammond B-3 organ.)

In September, Glass Harp found itself in New York's Greenwich Village recording its first album Glass Harp at Jimi Hendrix's Electric Lady Studios with Lewis Merenstein as producer. Years later, a story would circulate widely and persistently concerning Keaggy and Hendrix. It has been said that during an episode of The Tonight Show, Johnny Carson asked Hendrix, "Who is the best guitarist in the world?" Hendrix is said to have answered, "Phil Keaggy." Another version of the story has Hendrix being asked, "Jimi, how does it feel to be the world's greatest guitar player?" To which Hendrix supposedly replied, "I don't know, you'll have to ask Phil Keaggy!" This account is sometimes attributed to a magazine interview in either Rolling Stone or Guitar Player. Occasionally the story has the setting for the question being the Dick Cavett Show. Other versions have the question being posed to Eric Clapton. A more recent variant has Eddie Van Halen being asked the question by either David Letterman or Barbara Walters. Keaggy has long insisted that such stories are completely unfounded, noting that "it was impossible that Jimi Hendrix could ever have heard me...We...recorded our first album at Electric Lady Studios two weeks after his unfortunate death, so I just can't imagine how he could've heard me. I think it's just a rumor that someone's kept alive, and it must be titillating enough to keep an interest there...So I don't think it was said?and that's it for that!"

Glass Harp reformed around 2001 and released a new album titled "Hourglass" in 2003.

In 2004, Keaggy guest performed with the indie band Dispatch for several songs during The Last Dispatch. It was to be Dispatch's last performance together and became the largest concert in independent music history.[citation needed]

As of 2009, Keaggy continues to record and tour regularly.

The Cover Of Love

The Master & The Musician CD2

The Master & The Musician CD1