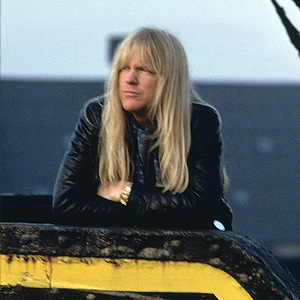 Larry David Norman (April 8, 1947 - February 24, 2008) was an American singer-songwriter and record producer who is considered a pioneer of Christian Rock. His music is primarily folk rock reminiscent of Bob Dylan and Neil Young, sometimes with strong orchestral or blues influences. He has had a strong influence on several later rock musicians and has been called one of the fathers of jesus music and christian rock.

In the late '60s he was a member of the rock band People!. People! released its first album I Love You in 1968 and had a Top 20 hit with the song, "I Love You" (written by Chris White of The Zombies).

Norman left People! and released his first solo album, Upon This Rock, in 1969. This could be considered the first Christian rock album, and included one of Norman's most memorable songs I Wish We'd All Been Ready. He followed up with the 1972 LP Only Visiting This Planet, which included an anthem for the burgeoning Christian rock movement, Why Should the Devil Have All the Good Music. What made the album particularly significant was the combination of credible rock and roll music with songwriting that critiqued both American society and the contemporary church. Norman's songwriting stunned many in the Christian music scene by its bold references to subjects ranging from the Vietnam War to venereal disease and even the U.S. space program. The album was named the most significant album in Christian music history by a mid-1980s critic's poll in CCM Magazine, though it had slipped lower (though still in the top ten) in a similar CCM Magazine poll in the mid-1990s.

Norman's albums were a mixture of rock styles, with lyrics that were usually very serious, but occasionally very silly, (especially when performing with his best friend Randy Stonehill, whose first albums in the 1970s were produced by Norman).

In the late 1970s, Norman formed Solid Rock Records, which went on to release Stonehill's Welcome to Paradise and The Sky Is Falling. He also produced Tom Howard's A View From The Bridge, and Mark Heard's Appalachian Melody among titles from other artists and himself.

But perhaps the most controversial involvement in Norman's career occurred over Daniel Amos' Horrendous Disc LP. The album had been dropped by Maranatha! Records after the label decided to quit releasing rock and roll albums and focus on children's releases and gospel music. So the band, now without a record contract, began to shop the project around to various labels. After considering a number of offers including the Warner Brothers' label Curb Records, Daniel Amos settled on Norman's Solid Rock Records. Norman had the album mixed and took photos of the band for the album's cover, though most of the tracks were recorded back in 1978 with Mike "Clay" Stone (Queen, Frank Zappa) as producer. For reasons that remain a mystery, the album was shelved until its release in April 1981, weeks before the band's follow up on Newpax Records, &iexcl;Alarma!, hit record stores. The incident continues to generate controversy among the fans of D.A. and Norman.

The late 70's marked a difficult time for Norman. He was severely injured aboard an airplane in 1978 when an overhead compartment door fell on his head. Norman claimed that this accident gave him a "bipolar trauma" which made it impossible for him to work to completion on albums; he did not record a studio album for the next twelve years. A dispute with Word Records resulted in the dismantling of the Solid Rock label in 1980. Norman moved to Europe and formed the Phydeaux label.

In 1992, he suffered a severe heart attack and was expected to live less than one week. He survived high-risk surgery and was left with very limited cardiopulmonary ability. Even though easily winded, he continued to perform, although very infrequently. He performed what was billed as his "final" concert in October of 2003. Then, in 2005 he announced two more "final" concerts: one in his adopted home of Salem, Oregon and the other at a seaside festival in Norway. Additional dates in the United Kingdom were also planned. A further concert by Norman (with two members of the band People!) took place in August 2006.

Norman was inducted into the Gospel Music Association's Gospel Music Hall of Fame in 2001. Larry passed away on Feb. 24th 2008 after a long battle with heart related problems.

The Best Of Larry Norman

Something New Under The Son (Vinyl)

And His Friends On Tour

So Long Ago The Garden

Only Visiting This Planet (Reissued 2004)