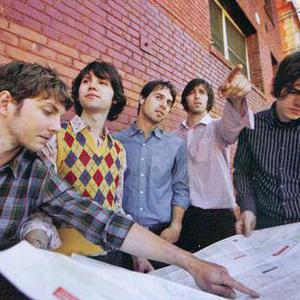 The Young Veins are a rock band from Topanga, California. The band is comprised of Ryan Ross and Jon Walker, two former members of the Las Vegas band Panic! At the Disco, along with bassist Andy Soukal (robot love story), drummer Nick Murray (The Black Apples, Rose for Bohdan, Foreign Born), and keyboardist Nick White (Tilly and the Wall, Bright Eyes). The group first formed in July 2009 after Ross and Walker left Panic! At The Disco, citing creative differences.

The group first formed in July 2009 after Ross and Walker left Panic! At The Disco, citing creative differences. The duo released their first new track, "Change" via MySpace on July 28, 2009 while shopping around for a record label to release their debut album. In October 2009, another new track, "The Other Girl" was previewed on Mark Ronson's show on East Village Radio. Band members Murray and Soukal joined in December 2009 and White was added to the lineup soon after.

In March 2010, The Young Veins were signed with One Haven Music and not long after, re-released their first single "Change" via iTunes on April 5, 2010 and subsequent singles "Take A Vacation!" and "Everyone But You" in May 2010. Their first full-length album, entitled Take A Vacation! was released on June 8, 2010. It was recorded at Castle Oak Studios and Sunset Sound in Los Angeles, CA. Several tracks were produced by Rob Mathes while the others were produced by Alex Greenwald.

On December 10th the band announced they were going on indefinite hiatus.