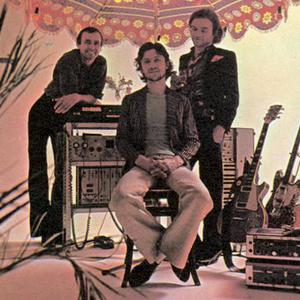 Though Harmonia began as a sideline excursion for Hans-Joachim Roedelius and Dieter Moebius of Cluster and Michael Rother of Neu!, the group became one of the most legendary in the entire krautrock/kosmische scene with the release of several mid-'70s LPs. After two studio albums recorded as Cluster, Roedelius and Moebius moved out to the German countryside to build their own studio in the village of Forst.

After two studio albums recorded as Cluster, Roedelius and Moebius moved out to the German countryside to build their own studio in the village of Forst. After several disappointments in his attempt to expand Neu! into a live unit, Rother retreated to Cluster's studio for a series of relaxed, improvisational jam sessions that wedded Cluster's exploratory space music with the chugging rhythms and guitar sense of Rother. The debut Harmonia LP, Musik Von Harmonia, appeared in 1974 (with an accomplished live track, recorded in Amsterdam). Though Rother also continued with Neu! to create another Krautrock classic, Neu! '75, Harmonia remained his focus for another LP, 1975's De Luxe. Brian Eno had proclaimed Harmonia "the world's most important rock group," and he eventually joined the proceedings for several 1976 sessions -- the legendary results of which lay unreleased for over twnety years, until Rykodisc acquiesced with the release of Tracks & Traces. Though Cluster and Eno continued their collaboration during the late '70s, Rother began a solo career with 1977's 'Flammende Herzen.'

Harmonia reunited in 2007 following the release of their album ?Live 1974?, a recording of their concert of 23rd March 1974 at Penny Station Club in Griessem, Germany. Rother, Roedelius and Moebius performed live as Harmonia for the first time since 1976, opening the Worldtronics Festival at the Haus der Kulturen der Welt in Berlin, Germany on November 27, 2007.

Harmonia made their first live appearance in the UK on 18 April 2008, playing on the opening night of the Ether Festival in the Queen Elizabeth Hall at Southbank Centre, London. In July 2008 the band also headlined the final day of the Supersonic Festival in Birmingham.

Harmonia further appeared at the All Tomorrow's Parties music festival in the UK in May 2008, at the Numusic festival in Stavanger, Norway, at an edition of ATP curated by My Bloody Valentine in New York in September 2008 and at the Australian series of the festival, curated by Nick Cave and the Bad Seeds in January 2009.