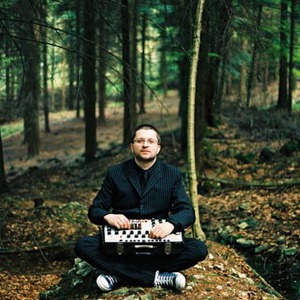 Harmonic 313 is a solo project of Mark Pritchard, making "Detroit-Style" Instrumental Hip-Hop. Mark also records/has recorded as Reload, Link, Troubleman, N.Y. Connection, William Parrott, and Roberto Edwardo Turner(The Returner). Pritchard may be more well known as 1/2 of the groundbreaking electronica groups Global Communication and Jedi Knights, along with Tom Middleton. His many other collaborative efforts include: Link & E621, The Chameleon, Secret Ingredients, and Reload & E621, all also with Tom Middleton.

Pritchard may be more well known as 1/2 of the groundbreaking electronica groups Global Communication and Jedi Knights, along with Tom Middleton.

His many other collaborative efforts include:
Link & E621,
The Chameleon,
Secret Ingredients,
and Reload & E621, all also with Tom Middleton.
Harmonic 33 and Use of Weapons with Dave Brinkworth,
Series 7 with Stephen Horne,
Shaft with Adrian Hughes,
Vertigo with Danny Breaks,
28 East Boyz with Kevin Hann,
Chaos & Julia Set with Dom Fripp,
Mystic Institute with Paul Kent,
and Pulusha with Kirsty Hawkshaw.

Grown up in Yeovil, a true West Country Boy - heavily attracted to the new sounds of Techno coming out of Detroit and anything with the funk as well as soundtracks and library music and most other aural weirdness.

Apart from a brief diversion into the culinary world, Mark was irresistibly drawn towards music making and that's where he is today. His first breakout ?hit? was the Cartoon Rave track ?Roobarb and Custard?, recording as ?Shaft?, in the early 90's. Since then, he has been responsible for many classics, gaining respect and admiration from a committed fan-base, critics, as well as fellow musicians.

Mark went on to set up the seminal Evolution label (named after the Carl Craig track), with Tom Middleton (up to this point known as ?Schizophrenia? AFX's collaborator/co-producer on the AFX track ?En Trance to Exit? on the Analogue Bubblebath EP.) The label was dedicated to the pioneering of Techno and Electronica, encouraging a very high level of experimentation with its no-compromise stance.

This combination produced some amazing music but was fiercely non-commercial in its approach, which ultimately led to it's demise. An acclaimed compilation of the label was released on Warp as well as many of the early releases from the label recently receiving the remaster/repress treatment.

After a few solo releases as Link, and Reload, Mark embarked on the Global Communication project, along with Tom Middleton- making deep, ambient music, incorporating the emotional soundscapes that became a signature of their work. Highly challenging whilst remaining beautiful the project took ambient music to another level, and introduced them to a whole new audience whilst winning massive critical acclaim. -?best ambient album of the decade' The Guardian.

Following this came the Link & E621 12? release on Warp, The Reload LP on Creation, and another label with Tom named ?Universal Language' with the same ideals and pioneering attitude of Evolution. The two released the Jedi Knights album through this label and became known for no-messing heavy beats and bass lines combined with an inimitable funkiness. They also incorporated elements of hip-hop and electro giving them a distinctive and instantly recognizable sound.

Shortly after came the classic chameleon Link 12'' for Good Looking records which became an anthem at Speed (LTJ Bukem and Fabios club night).

As their reputation grew they picked up remix work together, producing amazing reinterpretations of Lamb and Azymuth and Warp 69. Meanwhile, Mark developed his own midtempo sound, which can be heard on his remixes for Orb /Stereopeople /Cosmos/ KRS-1/ Tribe Called Quest, which have all become underground classics.

After a few house releases together in the late 90's, Middleton and Pritchard went separate ways. Tom went on to pursue his Cosmos, Modwheel, Amba and Self-titled projects as well as touring the world as a superstar DJ.

Mark continued with other collaborations and solo work including Use of Weapons and Vertigo projects, both on the Droppin' Science label. Working simultaneously for a variety of different labels, has Mark going cross genre and taking his sound to the next level.

Given a chance to fully explore his love of Hip Hop and easy listening- he has produced multiple Harmonic 33 Releases. Named after the frequency produced by planets turning on their axes, which it is believed other beings use to navigate the universe - the name betrays his deep interest in outer space and in discovery and science fiction. Using a seductive easy listening vibe combined with weird science Mark has produced some of the most interesting instrumental hip-hop to come out of the UK recently.

Whatever the genre, Mark's work has been characterized by his ability to of giving the music more room to get funky, and producing deeply emotional, and twisted sounds - guaranteed to get your groove on!

After a long standing relationship with Far Out Recordings and his involvement in various production and remix work there, Mark recorded an album for them of futuristic techno funk, tinged with Electro, hip hop and Latin: Trouble Man's ?Time Out of Mind? as wel as a compilation of his Troubleman singles and remixes, ?The First Phase?.

His new, current work as Harmonic 313 takes off from the Harmonic 33 releases into more ?Detroit-Style? (hence the 313) hip-hop and dub-step. Lot's of Dilla influence to be heard here, while still retaining his signature sound and genius attention to production details.