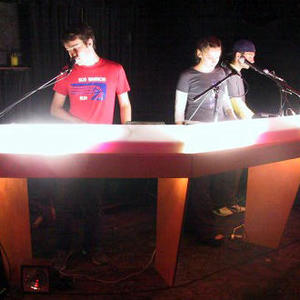 Before the world fell in love with The Postal Service, or even Dntel, Jimmy Tamborello aka James Figurine was already making our hearts melt with Figurine. Albums include Transportation + Communication = Love (1999) and The Heartfelt (2001) also a remix album Reconfigurine (2002). The genius of Figurine is brought to you by James Figurine (Jimmy Tamborello), David Figurine, and Meredith Figurine (Meredith Landman).

Simply known by these alter egos the three high school friends created music based mostly on the theme of long distance love, with an inventive electro-pop sound. David and James enjoy a certain amount of experimentation in their compositions while James and Meredith are on vocals playing out a verse by verse call and response relationship, kind of like an albums worth of Don't You Want Me which is later given homage to by The Postal Service with "Nothing Better". Figurine's interesting hybrid of forward-thinking techno and retro discotheque dance floor movers is what keeps the fans coming back for more.

Around the release of James' solo album Life Is Full of Possibilities* and his pop sensation Give Up with Death Cab for Cutie's Ben Gibbard, Figurine virtually fell off the map. Fans assume they broke up, but they've never said a thing. Even their website has disappeared as did David and Meredith Figurine. The music of Figurine has now become more of a fetish to their fans, constantly scouring the internet for lost tracks and demos... always thirsting for more. Clinging to chat rooms and forums for answers of the bands whereabouts or even a come back. Still they're filled with hope thanks to those last echoing words on the final track of The Heartfelt "Don't cry, we'll be back soon". We're still waiting.


*You can also find Meredith Figurine on the Dntel track "Suddenly Is Sooner Than You Think".

and check out the JAMES FIGURINE album from jimmy on monika (EU) or plug research (US)
:-)