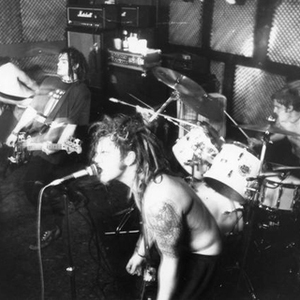 Buzzov-en has been cranking out drug-fueled, misanthropic sludge punk in various incarnations since their inception in 1990. Known almost as much for their out-of-control and sometimes violent live shows as they are for their music, the band carries on a tradition shared by such fellow troublemakers as Eyehategod and Antiseen. They have endured several lineup changes and apparent breakups over the years, with the only permanent member being singer/guitarist Kirk Fisher (alternately credited on albums as "Reverend Dirtkicker" or simply "Kirk.

They have endured several lineup changes and apparent breakups over the years, with the only permanent member being singer/guitarist Kirk Fisher (alternately credited on albums as "Reverend Dirtkicker" or simply "Kirk.") With drummer Ashley Williamson (aka Ash and Ash Lee) and bassist Brian Hill in tow, they recorded their first EP (Wound) and full-length (To a Frown) on the Allied label in the early to mid-'90s.

Eventually signing with the more prominent Roadrunner Records, the band unleashed their second full-length, Sore, in 1994. (By this time, they had added a second guitarist in Buddy Apostolis, aka Buddy and Little Buddy.) Yet instead of garnering the type of recognition as some of their labelmates (Sepultura or Fear Factory, for example), Buzzov-en remained very much a cult band, continuing to tour heavily (including a stint opening for GWAR) but ultimately disintegrating before they could issue a Roadrunner follow-up.

By the time of their next full-length, 1998's At a Loss, Fisher was the only original member left, with bassist/vocalist Dave "Dixie" Collins (later of Weedeater) among the new recruits. Assumed to have broken up once more, Fisher and company nonetheless returned yet again in 2001 with the long-delayed Revelation: Sick Again, this time on the Hydrahead label.

Violence from the Vault were the first recordings to follow the bands venerable Sore album (1994), and would prove to be the last with that lineup. These tracks, unearthed for the first time since their 1995 recording, are a testament to one of the most unique and overlooked bands from the US underground.