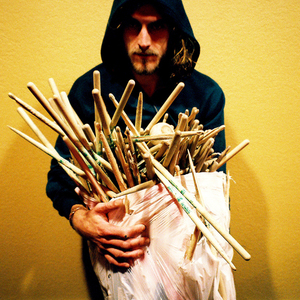 Zach Hill is a musician residing in Sacramento, California. He performs/has performed in numerous groups, including Hella, Holy Smokes, Nervous Cop, Death Grips, and a diverse other range of groups including Team Sleep (featuring Chino Moreno of Deftones), Goon Moon, and The Ladies (a duo consisting of Zach on drums and Rob Crow of Pinback on guitar). Zach is completely self taught, having started drumming around 1995.

One of Zach Hill's most defining characteristics as a drummer is his footwork. Many drummers are surprised when they realize that he only uses one bass drum and a single bass drum pedal when he plays. For example, in the song Imaginary Friends from Hella's Church Gone Wild record, Hill employs his characteristic double-stroke bass drum method throughout much of the song, leading many to believe he is using more than one foot to do so, when he is only using his right foot. Zach Hill's set thus far had had generally very low-tuned tom-toms and floor-toms. When playing rhythms back and forth between his bass drum and these tom-toms, it often sounds as if it is all being created by the bass drum. His snare drum sound is often a contrasting highly tuned "crack" sound.

A unique aspect of Zach's style is his liberal use of unconventional sounding cymbals, often referred to as "trash" cymbals. His most commonly and characteristically used trash cymbal consists of broken cymbals (usually between 3 and 4) stacked on top of each other, mounted just to his right of his high tom. This setup produces a harsh sound similar to that of a China cymbal, but with much less sustain. This is easily heard on almost every single Hella release.

In addition Zach has a custom made cymbal with a very warped shape that can be heard on the Holy Smokes album Masculine Drugs (clearly audible starting at 1:36 on the song Masculine Drugs (Tri-Duplex Edit)) the Hella album Church Gone Wild, The Ladies' first album, They Mean Us, and the Zach Hill & Mick Barr album Shred Earthship.

Zach also utilizes complex time signatures into his drumming. Zach has developed these time signatures through playing, and goes by feeling a beat rather than figuring it out "traditionally".

Another notable aspect of Hill's playing is that he is an extremely hard hitter. His equipment tends to wear down very fast due to the combination of the speed and power of his playing, which has been known to break lug casings and bend the top hoops of his drums from the sheer force of his technique.

In addition to music, Zach is also a visual artist. His art has been featured in the packaging to many of his musical releases. One of the most notable examples is his fully illustrated book Destroying Yourself is Too Accessible which included the Zach Hill and Holy Smokes album Masculine Drugs, released in 2004 on TNI books and Suicide Squeeze Records. The cover art of the Hella album The Devil Isn't Red, the artwork to There's No 666 in Outer Space and The Bitches Ain't Shit But Good People EP, and drawings in The Ladies They Mean Us are all credited to Zach; as well as art direction credits on many releases such as Hella's debut full length, Hold Your Horse Is, and their Total Bugs Bunny on Wild Bass EP, and the eponymously titled Nervous Cop record. He receives photography credit in addition to his many musical contributions on the debut Team Sleep album. He has also designed t-shirts and promotional posters for Hella and Team Sleep.

The Sacramento, California art space Fools Foundation ran an exhibition of Zach's art, titled Poltergeist, from April 1 to April 29 in 2006. Parts of the exhibit are visible in the photos accompanying Zach's article in the August 2006 issue of Modern Drummer and on the Fools Foundation.