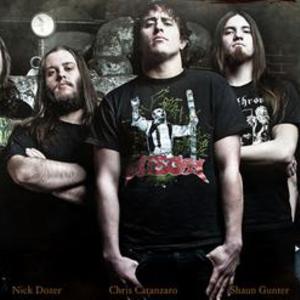 Ohio's Woe Of Tyrants spent the entirety of 2009 criss-crossing the US on a multitude of tours. After the grueling schedule came to a close, you'd think they would, and most bands do, head home to relax and take some time off. Not Woe Of Tyrants. They immediately dove right into songwriting for Threnody, the follow up to their sophomore album and Metal Blade debut, Kingdom Of Might. This time around, the guys have seriously turned up the shred-knob and have churned out an album chock full of incredibly exhilarating and exciting songs.

Their style lends itself to a level of brutality and heaviness present in bands like Children Of Bodom and Amon Amarth - their heaviness lies in melody and not in the amount of times the open E-string is chugged. These songs will put a smile on your face as opposed to a grimace.

The individual performances on Threnody are nothing short of impressive. Matt Kincaid and Nick Dozer combine to unleash a relentless twin guitar attack that is composed of as much razor wire sharp leads as it is of heavy artillery grooves. The lead guitar onslaught is bolstered further by Dustie Waring from BTBAM's guest solo on Venom Eye. Bassist Shaun Gunter is a recent addition to the lineup, but his performance, both on the record and live, is so tight that it would lead you to believe that he's been playing with the band since the beginning. Johnny Roberts' drumming is stronger than ever and pushes the technicality to a level that will be insanely fun to watch live. Vocalist Chris Catanzaro's delivery is as caustic as ever, mixed with a bit more diversity than previous efforts; see: Tempting The Wretch. Combine the band's stellar performances and their superb songwriting and you'll find that while listening to Threnody, head banging will be mandatory.

Though the true art of the "album" can almost be counted as lost in this digital age, there are lyrical themes throughout the album that tell a story. Catanzaro explains: "The album is entitled Threnody. Now for those of us who do not know what that word means right off hand (I had to look it up as I was reading a passage from Ralph Waldo Emerson long ago), a threnody is a song or hymn inspired by the grief of losing someone you love. The album tells a story of a non-specific individual traveling between planets searching for answers, while paralleling Satan's fall from grace to damnation at the same time. We all experience a change at some point as we travel through life, albeit not of the same magnitude as Lucifer, that will render us either content, or disgusted. When disgust is the feeling, then we begin to miss our former self as if they were an entirely different person. I'd like to be clear that I'm not referring specifically to Christians, or Muslims, or Amish or whatever else the kids are doing these days. Threnody, as we are using it, is a story of grief over losing oneself. This album will surprise those familiar with our band, and hopefully surpass any preconceived notions of those who are listening to us for the first time. If you have expectations for this record to sound like our last two albums, it doesn't. Well, a little like the others, as we still prefer playing leads over doing breakdowns, and we still wish we were Wintersun or Decapitated. But for the most part, this record is new territory for us and we are excited to unleash it."

Woe Of Tyrants, in their typical road-warrior fashion, will begin the touring campaign for Threnody with Overkill and Vader in April. This will be the first among many opportunities to see this band sonically rip apart venues. Don't miss this band live!

Threnody will be available everyway on April 13th, 2010