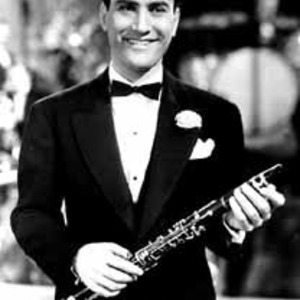 Arthur Arshawsky (23 May 1910 ? 30 December 2004), better known as Artie Shaw, was an accomplished jazz alto saxophonist,clarinetist, composer, arranger, bandleader, and author. He was born in New York City (but grew up in New Haven, Connecticut) and began learning the saxophone when he was 15 and by age 16, had begun to tour with a band. He reached Hollywood the first time, as a sideman with Irving Aaronson's band in 1931, performing at the famous Orange Blossom Room (site of the first Academy Awards ceremony in 1929).

Returning to New York City in1932, he became a highly in-demand session musician, working for example as one of just a handful of accompanists to Bing Crosby's first signature radio show for William S. Paley's already powerful and influential CBS radio network. Ultimately, Artie (who was known strictly as "Art" Shaw until his fortuitous Summer, 1938 contract with RCA Victor records' Bluebird label commenced) organized and led five, full-time touring orchestras that were all extremely popular -save the last, from 1949, with its be-bop oriented book. Ironically, that final Shaw-led big band (populated with players like Al Cohn), is considered by most jazz critics to have been Artie's best. With time out to lead a Navy service band (in the Pacific combat theater) during WWII, Shaw's actual big band- leading career lasted less than a decade overall -yet, it was a remarkably productive one, populated with some fourteen "Gold" records. These included such mega-hits as "Begin the Beguine", "Stardust", "Frenesi", "Moonglow", "Temptation", "Dancing In The Dark" and "Summit Ridge Drive" -the latter by his famous quintet billed as the Gramercy 5.

Shaw was known for being an innovator in the big band idiom, pioneering strings with jazz and using unusual instrumentations. His Summer, 1935 piece "Interlude in B-flat" was one of the earliest examples of what would be later dubbed "third stream". In 1938 he convinced Billie Holiday to be his band's vocalist, becoming the first white bandleader to hire a full-time black female singer. This 1938-1939 orchestra became phenomenonally successful and appeared in the movie "Dancing Co-ed" which also featured one of his future wives, Lana Turner, in the cast. Artie's clarinet playing, had by now reached a level that was arguably the greatest in jazz, easily rivaling that of Benny Goodman. Longtime Duke Ellington clarinetist Barney Bigard, himself a highly talented musician -cited Shaw (in 1940) as his "favorite" clarinet player. Literally abandoning his famous 1938-1939 band at the absolute peak of its' fame and earning power (Artie, just himself alone pulling down more than $10K per week) in late November, 1939, Shaw "abdicated" to Acapulco, Mexico. Returning to the U.S. he organized an entirely new orchestra, with full string section in the Summer of 1940. A truly stellar aggregation, it lasted until mid-1941, featuring stars Billy Butterfield, Johnny Guarneiri, Nick Fatool and Ray Conniff as principal arranger. This outfit can be prominently seen in the RKO film "Second Chorus" starring Fred Astaire and Paulette Goddard. The final pre-war Shaw band, started in late, 1941, had Davey Tough and Hot Lips Page and big hits on St. James Infirmary Blues and Blues In The NIght. Artie broke this outstanding unit up shortly after Pearl Harbor so he could "enlist" in the Navy -refusing an offered commission. Back from the Navy, Shaw put together a new band that featured Roy Eldridge and an ambitious library stocked with arrangements by Eddie Sauter, Buster Harding, Ray Conniff and others. Hit records for this band included "Little Jazz" and "S'Wonderful" and by now Artie was married to Ava Gardner. His final public performances (as a clarinetist) took place in 1954, including with a sublime quartet in an extended Las Vegas booking. Apparently, he last picked up and played his fabled clarinet in about 1960 at his beach house in Spain (as recounted in final wife actress Evelyn Keyes' autobiography) and resisted all lucrative offers to return to the stage until finally fielding a "ghost" band under the highly capable aegis of outstanding clarinetist Dick Johnson in 1985. For about the first year, Artie often appeared on stage with this very fine orchestra at certain, prestigious bookings, but soon tired of the "grind" -and not to Dick Johnson's dismay. This now true "ghost" band is still appearing during Summer seasons (with much of the original Shaw "books"), principally in the New England area (Johnson lives in Boston) and is well worth seeing. Although he had more wives (8) than bands, Artie fell one wife short of Charlie Barnet's record (for a famous bandleadrer) of nine.

The Centennial Collection (With His Orchestra)