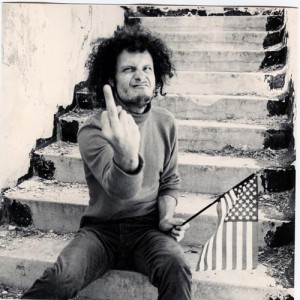 Larry "Wild Man" Fischer was born Lawrence Wayne Fischer, 1945 in Los Angeles, USA. Fischer has been variously described as a jobless, homeless, paranoid, certified-psychotic street singer, and as the missing link between Syd Barrett and Homer Simpson. He passed away in June of 2011 Fischer was institutionalized at age 16 for attacking his mother with a knife. Following his release, Fischer wandered L.A. singing his unique brand of songs for 10? to by-passers.

Fischer was institutionalized at age 16 for attacking his mother with a knife. Following his release, Fischer wandered L.A. singing his unique brand of songs for 10? to by-passers. Discovered by Frank Zappa, with whom he recorded his first album, Fischer became an underground concert favorite, earning him the title "godfather of outsider music." Zappa was responsible for Fischer's initial foray into the business of music, an album called An Evening with Wild Man Fischer, contains 36 tracks of "something not exactly musical." Frank and the Wild Man remained close--until Fischer threw a beer bottle at baby Moon Unit.

He has collaborated with Linda Ronstadt, Tom Waits, Jim Morrison, and Janis Joplin, and has recorded with Mark Mothersbaugh of Devo.

Fischer went on to record three full-length albums for Rhino. In the 1980s, Fischer worked with Art (Bill Mumy) and Artie Barnes (Robert Haimer), to produce two albums, Pronounced Normal (1981) and Nothing Scary (1984). Fischer has appeared on Rowan & Martin's Laugh-In and has been the subject of his own comic book The Legend Of Wild Man Fischer. In 1986, Barnes and Barnes also wrote and produced "It's A Hard Business", a duet featuring Fischer singing along with the late Rosemary Clooney. The song was the result of a bizarre telephone friendship that began after Clooney heard Fischer's song "Oh God, Please Send Me A Kid To Love."