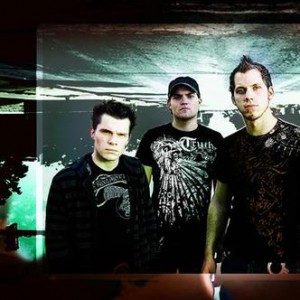 With two radio hits in the UK and the hit single "Dead Man" climbing up the Christian rock charts, We As Human have proven that an independent band from Northern Idaho can still make noise without a big label fueling the fire. The release of their EP Burning Satellites, produced by Grammy and Dove award-winning producer Travis Wyrick (P.O.D., Disciple, and Pillar), shows that We As Human pulls no punches when it comes to speaking the truth and getting their point across to the listener.

The release of their EP Burning Satellites, produced by Grammy and Dove award-winning producer Travis Wyrick (P.O.D., Disciple, and Pillar), shows that We As Human pulls no punches when it comes to speaking the truth and getting their point across to the listener. Hard-hitting topics saturate this collection of songs, ranging from false prophets to dying to oneself and even touching on abortion from the child's perspective.

In regards to the messages penned within the lyrics, lead vocalist Justin Cordle states, "When people put in a We As Human album I want it to challenge their thinking, challenge their mentality a bit...because if you can get people thinking, they'll do the rest. They'll make up their minds; they'll make the choice, right or wrong. It says to simply present the gospel, to be transformed by the renewing of your mind. What I would hope people take away is a whole lot of things to think about. And what they do with those thoughts, emotions and feelings is completely up to them."

With a highly anticipated tour with The Wedding and six festivals already booked for 2009, We As Human is looking forward to bringing their message and self-efficient rock show to the people.

"Rock and roll was born out of this experience that people were having. They loved the huge sound; they loved the big lights, the big stages, the big guitars..." Justin Cordle states. "We believe that the rock and roll feel has been dumbed-down in the Christian industry and that the industry holds the mentality that the bands that include too much of themselves into the ministry become selfish and prideful."

Justin disagrees with that form of thinking completely, responding, "I think the reason people come to shows is because they want to be entertained...it's still an entertainment business. And while we do talk about our faith, we do consider it a ministry, we do make sure that we keep ourselves in check and in balance--at the same time, we love rock and roll and the show and everything that the people love, so we try to do it as big and as bad as we can."

Even though We As Human is all about bringing rock and roll back to the masses, the band does not shy away or pretend to leave behind their main purpose for being a band."If I could get on a megaphone to the entire world right now I would want to tell them that there is hope in Jesus and that their life can be changed entirely by Jesus...when the lights go out and everything is over that's the only message that I would really want people to know--and that's the only message that even matters in this whole world."