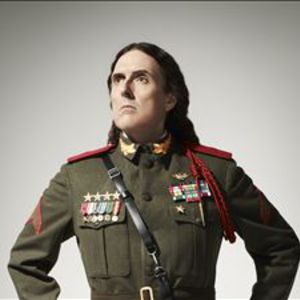 There is more than one artist with this name: 1) Norwegian quartet We was formed in 1993 by Krisvaag, Don Dons, Goshie and Thomas Felberg. Hailing from Oslo, Norway, the band soon started a reputation for being a phenomenal liveact. Playing shitloads of clubgigs in and around Oslo the first years soon made them sign to norwegian label Voices of Wonder in 1996. The release of their debut album Violently Coloured Sneakers the same year received great reactions from the press, both in Norway and Europe.

1) Norwegian quartet We was formed in 1993 by Krisvaag, Don Dons, Goshie and Thomas Felberg. Hailing from Oslo, Norway, the band soon started a reputation for being a phenomenal liveact. Playing shitloads of clubgigs in and around Oslo the first years soon made them sign to norwegian label Voices of Wonder in 1996. The release of their debut album Violently Coloured Sneakers the same year received great reactions from the press, both in Norway and Europe. The release took them abroad for the first time, including dates in Scandinavia and Europe. In order to maintain the steam the band obviously made, the band went back in the studio spring 97 and recorded the classic Wooferwheels. It was released in september 97 in Scandinavia, and in Europe january 98. Wooferwheels took them on their first headlining tours in Europe, two times in half a year, playing every dorf and city possible in the central european countries. This made them an extremely tight quartet, and WE received great livereviews wherever they came. While on their second european tour, the band went to see US legends Masters of Reality on an off day, and destiny brought them together with mainman master, Chris Goss (Kyuss, QOTSA etc). Inbetween indulgent herbexplorations and rock philosophy smalltalk, the band gave Goss their latest effort, Wooferwheels.


2)We? are one of the more bizarre and eclectic outcroppings of New York City's experimental ambient/dub/hip-hop scene, also the source of such artists as DJ Spooky, Sub Dub, Byzar, Liminal, and Brooklyn's WordSound collective. A trio of performance artists with hands in nearly a dozen different projects, We evolved out of a series of high-concept multimedia parties, clubs, and gallery exhibitions members Ignacio Platas (Once 11), Gregor Asch (DJ Olive), and Rich Panciera (Lloop) engineered over the previous several years. The three met in 1992 while living in Brooklyn, and their first work together under the name Lalalandia Entertainment Research Corporation included events thrown in retired mustard plants and meat-packing warehouses. In 1994, the group began a series of multimedia design and music installations under the name Multipolyomni (including a massive piece for Creative Times' Art at the Anchorage series titled "Early Aquatic Episode"), and We grew out of the musical end of that. Their first tracks appeared on WordSound's compilation Crooklyn Dub Consortium, Vol. 1 and Virgin's second installment of Macro Dub Infection, the latter of which placed them in the company of such edge-leading electronica artists as Bill Laswell, Techno Animal, Zulutronic, and Alec Empire. The group signed with the New York-based Asphodel label soon after, and their debut LP, As Is, was released in the spring of 1997. The Square Root of Minus One followed in 1999, with Decentertainment appearing one year later. Also involved in NYC's vibrant downtown experimental music scene, two of We's three members also perform with guitarist Danny Blume under the name Liminal. We have also remixed tracks for Arto Lindsay, Free Kitten, Tipsy, and Medeski, Martin, and Wood.They have released three albums so far:

The band appear to be broken up or atleast on hiatus.

3)We is a minimal electro project from Germany, using "vintage synths like the Roland Jupiter 4, the ARP Odyssey, the Korg MS 20 and, of course, the Roland CR-78 rythmbox.". See http://we-musik.de/

4) New tunes are coming from Mexico, the holy land of trance. We is a new project, formed by Jiser, who is better known as one part from the legendary duo Jey & Ex and Blue Grow. Their fresh sound can be discribed as inventive and original. It is coming to you with short sounds, dry basses and kicks, using voice samples as additional groove instruments.

Their "Survive" EP is a package of three stomping tracks, made for your pure pleasure on the dancefloor.

5) We, an emerging dance-pop group from South Korea.